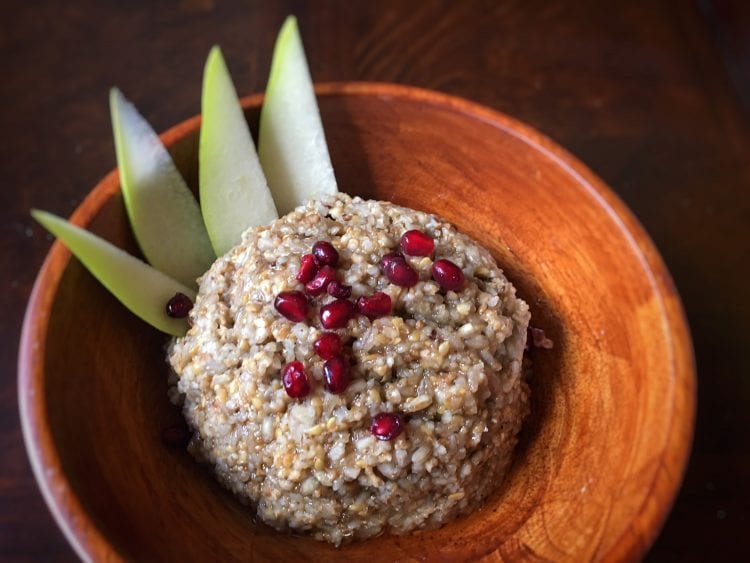 Good day, coqui! It’s time to roll up our toga sleeves and thresh some barley… we have some Roman porridge to make!  In the weeks to come, we are going to continue to look at some key areas of Roman food resources and this recipe is a part of a series that will be exploring The Mediterranean Triad; the three most valued agricultural resources during Classical Antiquity: Grapes, Grains and Olives.

This article is the second in the Mediterranean Triad series and it will briefly explore cereals (grains) and their presence in the early Mediterranean diet. Grains were first cultivated in the Levant and Fertile Crescent regions during the late Neolithic period. This was a time when hunters and gatherers began to realise that wild grasses could be domesticated, the seeds could be sown, and annual crops could be produced. As these early farming communities slowly migrated westward throughout the Mediterranean regions, on both the northern and southern shores, agricultural practices along with animal domestication and husbandry moved with them westward. Farming practices were also moving eastward and were also being implemented in India and China during this revolutionary period of human history.

The importance of grain in the early diet of the Levantine and Mediterranean-region is visible in many different ways in the archaeological record. In Mesopotamia, cuneiform tablets depicted the first written references ever to barley on a tablet that documents the administration and allocation of grain. In Egypt we find hieroglyphs depicting bread-making practices, ploughing of grain fields, and the worship of Osiris: a god who was assumed to be responsible for the annual flooding of the Nile and the healthy crops that followed. Ceres, the Roman goddess of grain crops and agriculture, was represented in Roman sculpture, temples, early written inscriptions, and on coinage. In the Bay of Naples, owing to the violent eruption of Mount Vesuvius in 79 AD, we also have some incredibly well-preserved archaeobotanical evidence in the archaeological record: carbonised wheat, spelt, barley and millet. In Rome, and its surrounding and provincial territories, grain was grown locally or imported in high volume from local or confiscated agricultural areas. Grain was consumed whole, after soaking or boiling, or as breads, cakes and porridges produced from flour after milling in manual or large commercial grain mills. Along with olive oil, grain was a major component of the Annonae Urbis and Militaris, the state-controlled food doles, that supplied all Romans with food rations in order to keep the populace and its military well-fed and peaceful. We can estimate these volumes by studying ceramic transport amphorae that were used to import and export these foodstuffs throughout the Empire.

If we want to explore some literary representations of grains during Classical Antiquity, it is always best to turn to the documentary record. Pliny the Elder provides us with several references and recipes on how to prepare bread and cereals in his writings titled ‘Historia Naturalis’ (circa 77-79 AD). One of the recipes that he presents in this document is for a simple Roman polentam, or a porridge made of barley. In  XVIII.14, Pliny tells us that barley is one of the oldest foods known to man and that the Greeks made their own version of polentam, called hordearii, that was often served to the gladiators. Now if that doesn’t tell you how reliable, nutritious and energizing this porridge was, I don’t know what will! So if you’re ready to taste a bit of history and dine like a gladiator, roll up your sleeves and dust off your quern-stones because we’re going to make barley porridge like the Romans! Here’s what you’re going to need:

A mortar and pestle

Pliny the Elder tells us how to prepare Polentam like so:

From this passage we can understand the following (in English):

‘Barley is one of the most ancient aliments of man, a fact that is proved by a custom of the Athenians, mentioned by Menander,1 as also by the name of “hordearii,” that used to be given to gladiators. The Greeks, too, prefer barley to anything else for making polenta. This food is made in various ways: in Greece, the barley is first steeped in water, and then left a night to dry. The next day they parch it, and then grind it in the mill. Some persons parch it more highly, and then sprinkle it again with a little water; after which they dry it for grinding. Others shake the grain from out of the ear while green, and, after cleaning and soaking it in water, pound it in a mortar. They then wash the paste in baskets, and leave it to dry in the sun; after which they pound it again, clean it, and grind it in the mill. But whatever the mode of preparation adopted, the proportions are always twenty pounds of barley to three pounds of linseed, half a pound of coriander, and fifteen drachmæ of salt: the ingredients are first parched, and then ground in the mill.

Those who want it for keeping, store it in new earthen vessels, with fine flour and bran. In Italy, the barley is parched without being steeped in water, and then ground to a fine meal, with the addition of the ingredients already mentioned, and some millet as well. Barley bread, which was extensively used by the ancients, has now fallen into universal disrepute, and is mostly used as a food for cattle only.’

Using Pliny’s ingredients, quantities and guidelines, here is how I prepared the barley porridge:

Pliny tells us how to store this ground barley but he does not state how to cook the porridge or make it easier to consume. I am assuming that you would mix it with hot or cold water. I chose to boil mine like traditional porridge using 1 cup of water per cup of dried porridge. Simmer it for 5 mins or more until the porridge thickens and then serve!

So how did our friend Pliny eat his porridge once it was fully prepared? Only he knows, I suppose. Polentam was also a meal that consumed throughout the day by Romans, it wasn’t strictly a breakfast porridge, as many of us would assume. Polentam was often prepared with cheese, honey, meat or fish. In the modern era we enjoy our porridges in the morning only with a bit of milk, fruit, honey or brown sugar. I decided to add a drizzle of honey and some pear slices and pomegranate seeds to my barley porridge as these additions were available to Romans during this time period. Mixing in some honey and fresh fruit knocked this porridge straight out of the park. The flavour of fruit and coriander combined with the nuttiness of the barley was such a delight! By the Gods, I will never go back to cream of wheat again… but I will be sneaking some milk on top of this barley porridge the next time to make it a bit creamier in texture.

Pliny’s ‘Polentam’ recipe produced a wholesome, filling and aromatic porridge that has a much stronger texture than traditional oatmeal and an almost floral accent attributed to the coriander. What I enjoyed most about this recipe is that it is essentially a representation of the first grain preparation technique that was espoused by most early farming cultures who cultivated wheat! This is truly a historic meal with very little alteration over the millennia. Long before leavened breads, we humans first became acquainted with grains by soaking them, then by pounding them to smithereens, and finally consuming them as some form of porridge or gruel. Later we moved on to shaping and baking this ‘porridge’ into primitive flat-cakes, then flatbreads, leavened breads and so on! What’s also beautiful about this recipe is that while you are preparing it and eating it, it is possible to reflect on the fact that many of us still make some form of porridge for our breakfasts today in the modern era. I myself grew up in a northern climate and hot porridge was a breakfast that we ate every day before school and it was something that filled us up, tasted great, provided us with a lot of calories, and was relatively cheap to buy and easy to make on a daily basis. When it comes to porridge, it appears that our foremothers and forefathers back in Rome, Greece, Egypt, Mesopotamia, and the Fertile Crescent definitely got something right when they produced a simple cereal meal that still appears on our tables today in much the same way that it did on their tables many moons ago. So if it ain’t broke don’t fix it, right? Who needs Corn Flakes or expensive artisanal granola when you can eat something that is historically proven to be nutritious, delicious, affordable and sustaining? From Pliny the Elder’s polentam to my grandmother’s recipe for oatmeal and raisins… not much has changed for the humble porridge since the dawn of agriculture and, quite frankly, I don’t think that I’ll ever want it to.