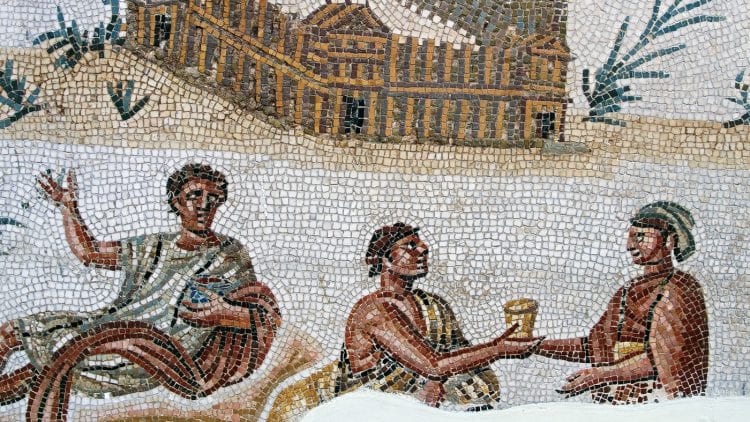 Explore the history of ancient Rome’s river ports and the city’s once bustling food distribution quarter with experimental archaeologist and food-writer, Farrell Monaco. Then cook an authentic Roman dinner using the three key ingredients in the ancient Roman diet: Grapes, Grains and Olives. This tour will be granting access to protected archaeological areas of Rome’s food distribution sites that are not typically accessible to the public. This is an incredible opportunity to see the most important food-related archaeological sites in the city of Rome.

We’ll spend the morning touring the hidden archaeological traces of ancient Rome’s food-related distribution, storage and disposal sites in the historical neighbourhood of Testaccio.  The tour will begin at the Porto dell’Emporio river wharves along the Tiber river, then we’ll make our way to Porticus Aemilia and the subterranean food storage warehouses once known as the Horrea Galbana.  We’ll finish the tour with the crown jewel of the archaeology in the Testaccio area: Monte dei Cocci (Testaccio), an ancient man-made hill comprised entirely of ceramic pots that once contained Rome’s olive oil supply during the early Empire.

After a quick lunch, we will spend the afternoon cooking an authentic Roman dinner using three key food items in the Roman diet: grapes, grains and olives; The Mediterranean Triad. We will also incorporate other key ingredients that were imported through the Emporio port system: garum, olive oil and wine. During the cooking class, we will learn about these key ingredients, their origins, the technologies used to process them, and some of the meals that were prepared with them by the ancient Romans. Participants will leave with a booklet of Roman recipes, a complimentary tote-bag, and a full belly!

Transportation: All transport for the tour/class will be provided from a meeting point in the Piramide/Porta San Poalo area.

Class sizes are small and limited space is available so register now!

Click here for further information regarding this event and others being offered in 2019: https://tavolamediterranea.com/category/classes-and-retreats/

See you in Rome!