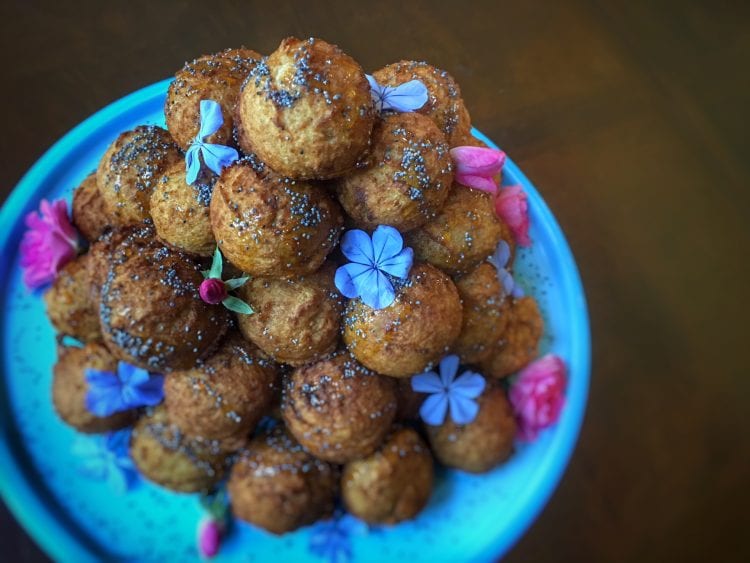 I don’t know about you but I’ve developed a serious sweet-tooth lately. Perhaps it’s the cold weather?… Perhaps my blood-sugar is low?… Whatever it is, I’ve been putting my hand into the cookie jar a few times too many. So much so that I’m starting to hear my mother in my head whispering “Brush your teeth after those biscuits or you’re going to get a cavity!“… I can’t really say that I’m too bothered by my recent sweets intake because, to be honest, biscuits and cakes are delightful and they make me very happy!…And I don’t think I’m alone in this. I think sweets make many people happy and have done so for millenia. The Romans are no exception to this rule and our friend Cato is a fine example of a Roman with a serious sweet-tooth. All you have to do is read a few of his recorded recipes to discover this! I’d say that Cato the Elder and I are likely two peas in a pod when it comes to dipping into the cookie jar. If he were around today, I suspect he’d probably be that buddy that I’d go on a midnight doughnut run with. So, in keeping with feeding my sweet-tooth, I have decided to feature Cato’s recipe for ‘Globi‘: Deep-fried, honey-soaked, ricotta and wheat balls. Can I get an amen?

So who is Cato the Elder, anyways? Cato the Elder, or Marcus Porcius Cato (Marco Porcio Catone), (234 BC – 149 BC) was a respected Roman senator, soldier, historian and patriot who fought to preserve Roman culture and tradition in the face of Hellenistic influences in the late Republican period. Cato was no different than most Roman soldiers: when he wasn’t serving Rome he was working his land. Cato wrote his manual for agricultural life ‘De Agri Cultura‘ in 160 BC and, similar to his other writings ‘Origines‘ (168 BC), it lends a great deal of insight into Roman history, Roman daily life, and Roman food production. In ‘De Agri Cultura‘, Cato included a recipe for Libum: a cake- or bread-like delicacy that was used primarily for religious ritual offerings or special occasions. Libum is made from fresh cheese and spelt flour and, like Tracta, Cato uses it as a base for some of his other recipes as well, Globi being one of them.

One of the interesting aspects of recreating ancient recipes is that it requires a fair amount of experimentation. Roman recipes recorded by Cato, Pliny and Apicius, for example, are often nothing more than loose guidelines with some documentations offering measurements and others offering only ingredients and loose preparation instructions. It is also possible that certain preparation methods or ingredients (salt and water, for example) may have been ‘a given’, or used to taste, in daily Roman cooking so perhaps they weren’t recorded in thorough detail. I highlight this aspect as one of the mysteries of Cato’s Globi recipe is the size of the actual fritters. We can easily grasp that the shape of Cato’s delicacies is a ball; the word ‘globus‘ in latin means ‘sphere’ or ‘globe’. But what size were Cato’s globi supposed to be? This recipe took some experimentation in order to achieve a fritter that was cooked thoroughly and size had everything to do with it. I had suspected that if I had made the globi the size of a golf ball, or larger, they would not cook through thoroughly, so I decided to conduct an experiment: I made one batch of large globi (1.5 inch/golf ball size) using a rounded tablespoon measurement of dough; and a second batch of small globi (1 inch or less/jumbo marble size) using two teaspoons of dough. They both yielded different results after frying.

This recipe will make approximately 48 large globi or 96 small globi. Follow along below to find out how it all went and roll up your sleeves if you care to join in! If you’d like to make these globi in your own home, here’s what you’re going to need:

To prepare the globi Cato first tells us to make the dough using his recipe for Libum. Referring to Cato’s ‘De Agri Cultura’ we read that his original latin states:

“Make libum by this method. Break up two pounds of cheese well in a mortar. When they will have been well broken up, put in a pound of wheat flour or, if you wish it to be more delicate, half a pound of fine flour and mix it well together with the cheese. Add one egg and mix together well.”

Once the dough is prepared, Cato tells us how to make the globi:

“Mix the cheese and spelt in the same way, sufficient to make the number desired. Pour lard into a hot copper vessel, and fry one or two at a time, turning them frequently with two rods, and remove when done. Spread with honey, sprinkle with poppy-seed, and serve.“

Here is how I prepared my globi, as per Cato’s instructions:

Step 1. Mix the wheat flour, cheese and eggs together in a mixing bowl by hand or in a mixer. It won’t take long to get a pliable wad of dough. I would not recommend using white refined flour for this dough as the coarseness of whole wheat makes a more durable dough and the flavour of the globi will be stronger once cooked.

Step 2. Knead the dough for a few minutes and then let it sit for 15 – 30 minutes on the counter to bind and firm up a bit.

Step 3. Take a small pot or a deep saucepan and fill it with lard or cooking oil. I used a pot of 7″ in diameter. Make sure that you have a depth of about two inches of oil in the pot or enough to cover the globi as they’re frying. Heat the oil on medium for approximately 5 – 10 minutes to bring it to frying temperature. Note: You’re working with hot oil at this point so do no step away from the stove, take a phone call, or let children handle the pot or the cooking at this stage. Pay attention. Once the oil is bubbling, reduce it to medium or medium-low. The lower temperature of the frying oil will result in the globi being fully fried both inside and out.

Step 4. Shape your globi into 1″ sized globi or smaller. If the dough is sticky, dust your hands with flour as you roll the balls.

Step 5. Drop four or more globi dough balls at a time into the hot oil using a metal spoon. Make sure that there is enough space in the oil for the globi to cook and not stick to each other. Alternatively, you can use an ice cream scoop and drop the balls straight into the hot oil from the scoop. Deep-fry the globi until they are a dark golden brown. This will take approximately 5-10 minutes on medium-low heat. Remove the globi from the oil using a skimming spoon and place them on a platter lined with a tea towel to cool and to drop any excess oil.

Step 6. Dress the globi with warm honey and dust them with poppy seeds serve on a decorative serving platter or individual single-serving dishes and enjoy!

Cato’s globi turned out to be two things: a terrific culinary experiment and a delightful dessert. I discovered something critical during my experiment: If we are to follow Cato’s directions literally, with no additional baking involved, it is imperative that the globi dough be formed into a size equal to, or smaller than, 1 inch in order to cook thoroughly. When I reduced the size of my globi from 1.5 inches to 1 inch or less, I had a globus that cooked fully and quickly in the oil. Perhaps globi were meant to be small enough that you could pop two or more into your mouth at a time? There is another possibility here: perhaps globi were flattened slightly into round disks prior to cooking, like tiny pancakes? This would have enabled them to cook thoroughly as well, if they were larger. But then why call them globi if they were flattened? It’s a mystery, folks! One that we are going to have to continue to explore… and so be it! Because these little darlings are delicious.

Aside from the exciting challenges of working with missing information and long extinct spices, there’s another aspect of recreating ancient recipes that I love: the simplicity of the results and the realization that our taste-buds really haven’t changed that much in 2,000 years. Globi are a testament to this theory. They are simple, crispy little mouthfuls that, when topped with warm honey and poppy seeds, bring a warmth and happiness to your tastebuds in such a wholesome and humble way. They aren’t profiteroles and they’re not decadent pastries covered in chocolate or soaked in rum. These are simple and humble representations of how the Romans indulged their collective sweet-tooth with the limited foodstuffs that they had available to them, and they’re delicious. Crispy and chewy on the outside, soft and warm in the middle, dripping with warm honey and poppy seeds. Who needs profiteroles when you can make something much more interesting, like Globi? The taste of ancient Rome is in every biteful! What I also love about these little darlings is that it tells me something rather important: Romans liked their sweets too. They liked a nice sweet-bread or a soft sweetened cheesecake just as much as we do. I like to think that if Cato invited me over for dinner that we’d sit happily over a platter of globi, popping them into our mouths one by one, as he clarified every single one of his recipes for me! Yes… I’m pretty sure that Cato wouldn’t slap my hand either if I went to his cookie jar one too many times. I’d say Cato had just as big a sweet tooth as I do and I adore him for it.

Cena bene, amici… But don’t forget to brush your teeth! About the author: Farrell Monaco is a lover of history, travel, cooking, dogs, books, bread and baths… and not necessarily in that order. She is a member of EXARC, the Society for American Archaeology, and currently sits on the SAA Media Relations Committee. Inquiries can be directed to: [email protected]