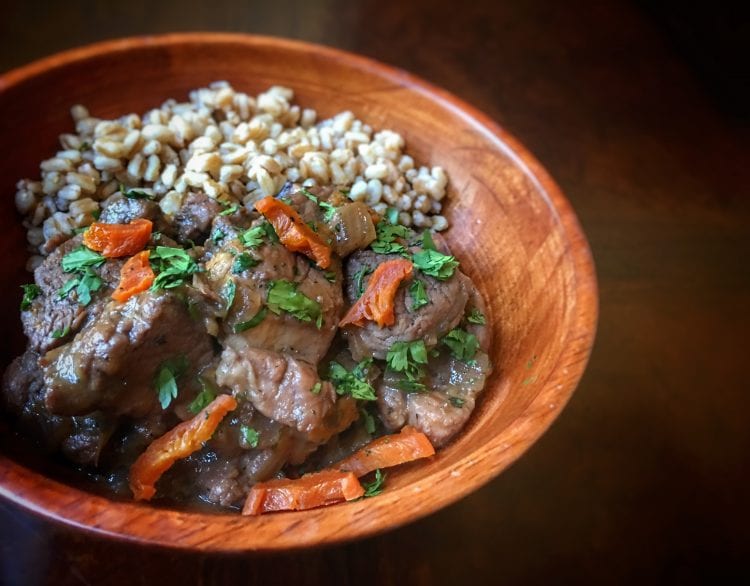 Salvete amici! The season of stew is upon us and I couldn’t be happier! Up here in the northern hemisphere the days are growing cooler, nighttime is arriving earlier, and people are starting to naturally shift into the ‘home cocooning mode’ that tends to start as autumn sets in. During this ‘cocooning’ phase is when many people return to their kitchens again and cook more frequently than they did during the hot, bright summer days that keep us outside longer. Breads are baked, crock pots are bubbling, soups are simmering, and nightly meals start to take on a hearty and filling quality leading up to annual family and community gatherings such as Thanksgiving, Winter Solstice, Christmas, Hanukkah, Kwanzaa, Ramadan, and Diwali, for example. I feel that it is only fitting, then, that we prepare our bellies and waistlines for the months to come by testing out some hearty and filling ancient recipes, nay? So in preparation for the season of feasts, I am calling on our old friend, Apicius, once again to present another beautiful recipe for Roman comfort food: Minutal.

Minutal is a basic ragout, or stew, that is made from meat or seafood, and other accompaniments, and is meant to please the palate as well as stick to the ribs. This recipe for ‘Pork and Apricot Minutal’ may look like a multi-vehicle collision of unusual flavours when you examine all of the ingredients but I assure you that it is nothing short of ancient culinary perfection once it is served; each ingredient compliments the next one very well. Note: I’ve adapted this recipe to be served with boiled farro to make a complete meal. I have also added 1/2 tsp of salt to the minutal recipe as Apicius rarely (if ever) mentions salt and, on occasion, we may require it to please our modern palates after tasting the original recipe. Before we move on to the minutal preparation, however, let’s have a little history first:

It is believed that Apicius lived in the 1st Century AD during the reign of Tiberius, but the writings and recipes (more so loose guidelines) associated with his name weren’t published until the Middle Ages and later. While the Apician recipes, titled De Re Coquinaria, that have been scrutinised and studied for hundreds of years do indeed reflect accurate Roman Imperial food preparation and ingredients, it is often suggested that the recipes may have been devised as a tribute to Apicius, or Apician gluttony, as opposed to being created by his own hand in the 1st Century AD. The recipes outlined in De Re Coquinaria are some of the most scrutinised and tested Roman recipes in the documentary record; Minutal ex Praecoquis is one of them.

Now, let’s talk about garum for a few minutes: This recipe calls for garum, a salted and fermented fish sauce, and it’s important that we explore some of the history of this ancient condiment as it was a cornerstone of Graeco-Roman cooking and, much like olive oil, it was one of the most coveted and traded foodstuffs in the Classical Mediterranean.

Garum, often called the MSG of the Graeco-Roman world, was a flavour enhancer that was created, using fish and salt, and distributed in high volume throughout the Classical Mediterranean. Robert Curtis (1991) notes that fish-sauce was likely a by-product of Roman fish salting installations that made use of the entrails, heads, tails and bones of the fish by salting and fermenting them for months, in the hot sun, in large dolia (ceramic food storage vats) making a food additive, or sauce. Curtis states that the Romans produced four different types of fish sauce: garum, liquamen, muria and allec. Garum, along with Liquamen, were terms often used broadly to describe ‘fish sauce’. Garum was actually the primary product that was distributed and allec, it is believed, was the dregs of the dolia, of low quality, and was likely consumed by the lower classes. Archaeological remnants of garum production centres can be found throughout the Mediterranean today with some of the best preserved sites located in modern-day Spain, France, Portugal and at Pompeii in Naples (Italy).

Now, if you’re thinking to yourself: “What a wretched, smelly operation that must have been!”, you’re not wrong in doing so. Pliny the Elder called garum “that liquid of putrifying matter“, and Manilius described garum production as “an entire mass of putrid confusion mixed together“. So why the heck were the Greeks and Romans making this horrible stuff? Because it was versatile and the end-product tasted good. That’s right. By the end of the fermentation and salt preservation process, a flavour enhancer was born that became a cornerstone in Greek, Roman and Byzantine cooking. Galen of Pergamon (Claudius Galenus) also cited garum as a medicinal source to aid in digestive problems in his writings “On the Properties of Foodstuffs” (2nd c. AD). But if garum was so tasty and useful, why don’t we see it on our tables today? That’s a question that begs further research but I do know that you can still find fish sauce being used in Thai, Vietnamese, Malaysian and Filipino cooking. It is a Vietnamese brand, Red Boat, that I have used as garum for this recipe.

Note: It’s important to keep an open mind and an adventurous palate when using fish sauce; don’t be afraid to try it and don’t get turned off by the musky aroma that it has. Trust me. It may smell a bit ‘odd’ but it tastes quite good in the mix. It is essential to opening up some of the flavours in this dish and it adds a hint of its own distinct flavour as well. Just don’t over use it. Easy does it with the garum… I’m sure that even old man Apicius didn’t allow his kitchen staff to overuse the garum. If you cannot find fish sauce in your local community grocery stores or markets you can find it easily online on Amazon.

With that said, let’s roll up our sleeves and get cooking with Apicius! Here’s what you’re going to need:

Apicius tells us to prepare the minutal in the following manner:

We can translate the following from this passage:

“Place in a pot oil, garum, wine, chopped dry shallots, chopped cilantro, and port shoulder cut into cubes and already cooked. All this cook with crushed pepper, cumin, dry mint, dill, moisten with honey, garum, raisin wine, vinegar and some of its own juices to temper. Add in pitted apricots, and let it simmer until they are cooked. Break in tracta, so it’s thickened, sprinkle on pepper and serve.“

Here is how I interpreted and prepared the recipe:

Step 1. Place 3 cups of water on to boil for the farro/barley. Add 1/2 tsp of salt and some olive oil. Add 1 cup of uncooked farro to the water once it has boiled, simmer on low for 30 minutes covered.

Step 2. Make the “raisin wine” called for in Apicius’ recipe: Combine 1 cup of red wine and 1/2 cup of raisins in a sauce pan and heat until boiling. Simmer until there is approximately 1/2 cup of reduced raisin-infused wine left. Some wine will evaporate, some will absorb into the raisins. Strain out the raisins and reserve 1/2 cup of the ‘raisin wine’ for the sauce.

Step 3. Dice the pork into cubes.

Step 4. While simmering the raisin wine in its own saucepan, combine olive oil, diced shallots, and pork in a large pot or pan and sautee on medium for 5-10 minutes.

Step 6. Add in all of the spices, honey, vinegar, chopped cilantro, apricot and garum. Remember that garum can be potent and overpowering if overused. Use only the amount that I’ve outlined or less if you find it to be too strong. If you decide to use less, top up the sauce with some additional salt to suit your palate.

Step 7. Once the minutal has simmered for 5-10 minutes more, crumble a piece of tractum or a whole wheat matzo cracker into the sauce to ‘bind’ and thicken the mixture. If you’re interested in making your own Roman tracta, or reading about the many uses it had in Roman cooking, including as a sauce thickener, see this article. For this post, however, I have decided to experiment with this ingredient by using a whole wheat matzo cracker as a modern substitute. It is, after all, a modern laganum or hardtack. It is nothing more than whole wheat flour and water. In a pinch, I’d say that matzo is a terrific stand-in for tracta.

Step 8. Once the sauce has thickened, serve the minutal with the boiled farro and garnish with a pinch of diced fresh cilantro. A side of fresh-baked panis quadratus with olive oil would also go beautifully with this minutal.

The final result for this minutal recipe is a beautifully balanced and filling pork ragout that is tangy, sweet and peppery at the same time. The garum salts the sauce beautifully and isn’t overpowering in the mix. The red wine and apricots in the sauce lend the overall flavour a rich, fruity and tangy edge that goes so perfectly with the pork that I gasped when I took my first bite. The ragout and the farro combined makes enough to serve four people a nice sized dinner. If you throw in some panis or tracta on the side, you’ll have everyone well-fed and off to bed just in time for you to hit the midnight mulsum and catch a few reruns of HBO Rome! 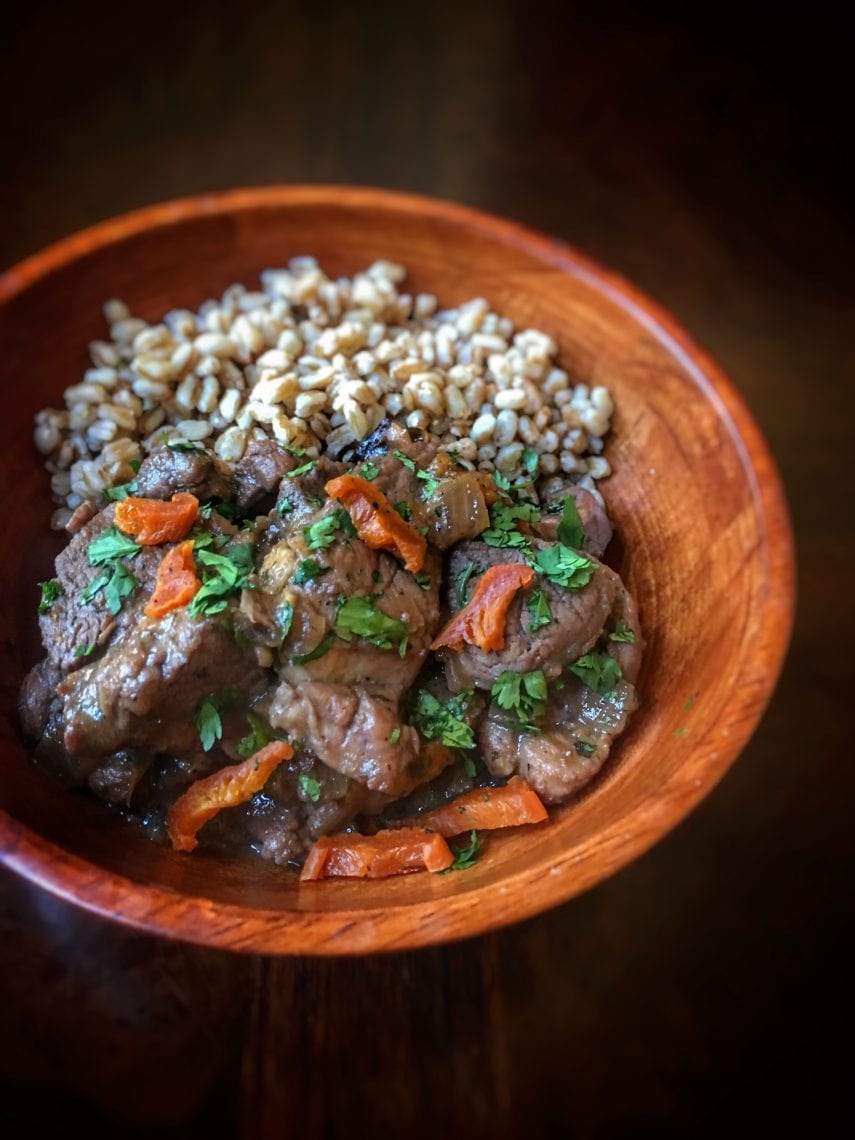