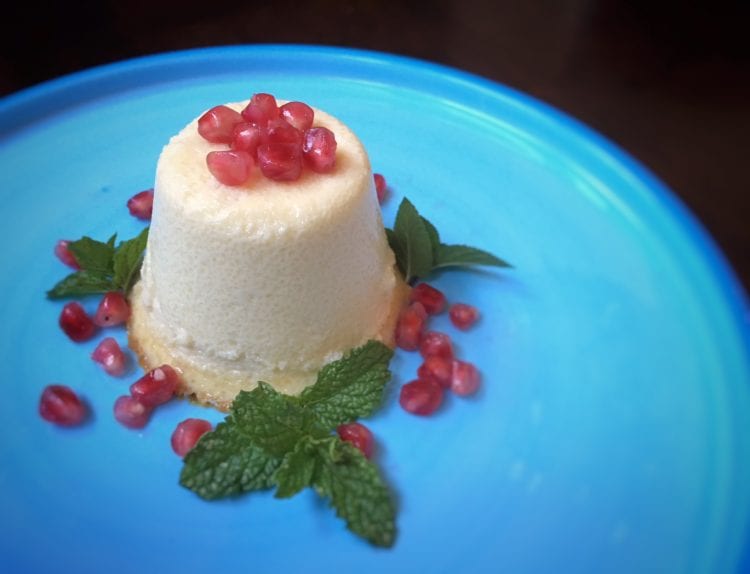 Salvete omnes! Who among you has a craving for sweets today? If that’s you, then you’re going to love this week’s recipe.

Last week I posted an article on ancient Roman sweets comparing my sweet tooth to that of Cato the Elder in an attempt to prove to myself that my over-indulgence in cookies, cake and chocolate is normal and is something that has been practiced in our species for millenia. Well, if I’m to use the Roman documentary record and the recipes found within it as support for my habit, I’d say I’m in good company.

When it comes to desserts, I’ll eat anything that you set down in front of me: puddings flambée’d in brandy; liquid chocolate cascades; tapioca beads balanced on culinary foam; or bonbons served on a bed of rocks and dry ice (Thank-you, Francesco Apreda!). But at the end of the day, if I had to choose, I’d take a simple, white sponge cake with fresh strawberries and unsweetened cream. Why? Because sometimes it’s just good to get back to basics. As foodies and culinary explorers, I think that we often have a tendency to over-complicate food and ‘dress it up too much’. It’s as if our tastebuds get bored or we need more exciting things to look at on our plates to keep us from dying of culinary boredom. It’s recipes like this one, for Apicius’ Tiropatina, that counters these tendencies by taking us back to basics to a time when simple, natural flavours held the spotlight. Ancient Romans didn’t do culinary foam, after all, and thank the gods for that.

If you read my recent article published on Cato’s Globi, you’ll notice that ancient Romans liked their sweets just as much as you and I do. Our Cato had quite the sweet tooth and I think that Apicius was no different in this regard which is why I am featuring the Apician recipe for Tiropatina from De Re Coquinaria for this article. This simple recipe produced the most delightful, fluffy custard that it’s no wonder that Grocock & Grainger (2006) drew attention to the fact that modern chefs haven’t changed the milk-to-egg ratio that much when they make crème caramel and crème brûlée in the modern kitchen. You really cannot go wrong with this recipe but before we get to whisking the eggs and milk, a bit of history first:

It is believed that Apicius lived in the 1st Century AD during the reign of Tiberius, but the writings and recipes (more so loose guidelines) associated with his name weren’t published until the Middle Ages and later. While the Apician recipes, titled De Re Coquinaria, that have been scrutinised and studied for hundreds of years do indeed reflect accurate Roman Imperial food preparation and ingredients, it is often suggested that the recipes may have been devised as a tribute to Apicius, or Apician gluttony, as opposed to being created by his own hand in the 1st Century AD. The recipes outlined in De Re Coquinaria are some of the most scrutinised and tested Roman recipes in the documentary record; Tiropatina is one of them.

Instructions from De Re Coquinaria tell us to prepare tiropatina in the following way:

From this passage we read the following in English:

“Cheese patina: take some milk and choose a dish of sufficient size to hold it; flavour the milk with honey as though for milk pudding. Put in 5 eggs to a pint or 3 to a 1/2 pint. Dissolve them in the milk so that you have a smooth emulsion. Strain it into a Cumaean clay dish and cook over a slow fire; when it has set, sprinkle with pepper and serve.”

(From: Apicius – A Critical Edition With an Introduction and English Translation (2006) by Christopher Grocock and Sally Grainger).

Following the instructions above from De Re Coquinaria, here is how I prepared the Apician recipe for Tiropatina:

Step 1. Using a mixer or a hand-whisk, beat all of the eggs in a large mixing bowl until the mixture has thickened. Cover and set aside.
Step 2. Combine the honey with the milk in a large pot and bring the mixture to a low boil (med to med-high) whisking the entire time. Do not let the milk boil for long, just let it reach the boiling point and then turn the element off. Leave the mixture to cool until it reaches room temperature.
Step 4. Preheat the oven to 325 F/165 C/Gas Mark 3.
Step 5. Fold the cooled milk and honey in with the beaten eggs.
Step 6. At this point you can decide to make single serving mini tiropatinae or large flans. You’ll have enough mixture to make 18 single-serving tiropatinae or two large flans. Wipe the inside of your molds (ramekins, muffin tins, pudding molds, for eg.) with a light coating of olive oil. This will allow the tiropatinae to fall out easily once they’re ready for serving.
Step 7. Place the molds inside of another large baking dish filled with enough water to reach halfway up the molds. Pour the tiropatina mixture into the mold and bake for 1 hour until the flan mixture is golden brown on top and does not jiggle too much when you remove them from the oven. Note: The small single-serving tiropatinae will bake through in 1 hour. The large flans will require 1.5 hours of baking time.

Step 8. Once the flans have baked, place the baking dishes, with the water and the molds still in them, on the stove-top to cool to room temperature. Once cooled, cover them and place them in the fridge (as they were baked: in their trays, water and all) to chill and set overnight.
Step 9. Remove the chilled molds from the fridge and tip them gently over the serving dishes or cake-tier that you will use to display and serve the tiropatinae on. Removing them from the molds will be tricky so be patient and read below.
Step 10. Use the backside (blunt side) of a butter knife blade and run it gently along the inside of each mold. Turn the mold(s) over onto a serving dish and tap the mold gently with the knife handle to release the flan. If the flan doesn’t budge, boil a kettle and lightly soak some tea-towels with some boiled water and wrap the outside of each mold with a hot towels. Do not let the towels get too wet, you don’t want hot water to drip on to the serving-dish surface. After a few hot towel applications, the flans will gently fall from the inside of the mold and onto each serving dish. Try to make sure that when you release the tiropatinae from each mold, it is falling onto the dish that it is to be served on. You don’t want to move it again unless it’s going from the serving dish to your mouth!
Step 11. Garnish with mint and pomegranate seeds and serve.
Step 12. Lastly, crack some fresh-cracked black pepper on top of the flan to taste a Roman flavour combination that is unusual and very pleasant!

After tasting these tiropatinae (yes, that’s plural because, let’s face it, you’re not really going to eat just one…) I was completely blown away. There’s something absolutely magical that happens when you combine subtle hints of honey with the tangy bold flavour of pomegranate seeds. Together with the fresh, mildness of flan, the dominant flavour was almost floral. Airy, fresh, light and floral. The texture of the flan is fluffy and the honey is not at all overpowering in the mix; it lightly sweetens the flan which, again, makes it very easy to put back two or nine of these little darlings in one sitting. I could honestly see myself topping these tiropatinae with a variety of fruit and berries.

What this particular recipe has shown me is that, once again, ancient Romans loved their sweets just as much as we do. The fact that Roman cooks, like our friend Apicius, had custard pudding figured out 2,000 years ago makes me a happy woman indeed. You see, ancient Romans had less extensive dietary sources than we have today. When you’re dealing with limited ingredients and you don’t have cane sugar, caramel, culinary foam, or a blow torch on hand to brûlée the top of a flan, for example, it affords a golden opportunity to discover that the basic, core flavours really do make up the heart of the dish itself.  Who needs sugar, foam or a blow torch when eggs from the coop, milk from the cow, honey from the beehives, and fruit picked from the orchard can produce this kind of flavour complexity? Try it at home and see for yourselves. The proof is in the pudding!

About the author: Farrell Monaco is a lover of history, travel, cooking, dogs, books, bread and baths… and not necessarily in that order. She is a member of EXARC, the Society for American Archaeology, and currently sits on the SAA Media Relations Committee. Inquiries can be directed to: info@tavolamediterranea.com