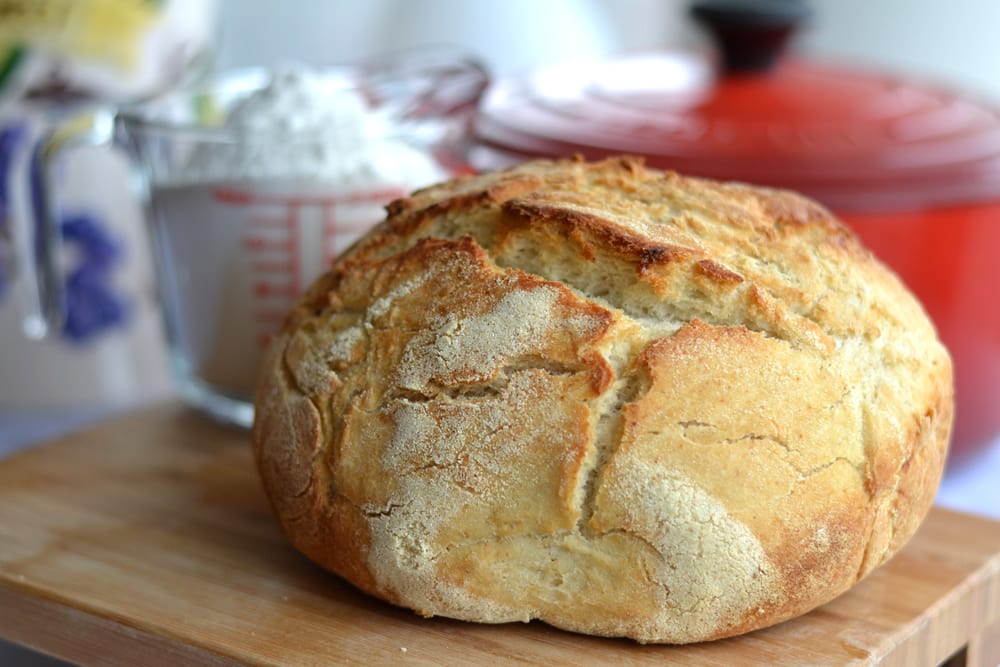 First of all, we all need to understand one basic thing: there’s no need to ever buy bread from the shops when you know how to make your own.  It’s very easy to make a nice loaf of bread and it should never cost you more than $1 when you add up all the basic contents that go into a nice, simple loaf.  There’s no need to pay $5 or more for a loaf of artisanal bread from your local market when you can learn how to make an even better loaf at home… and you don’t need that $300 bread machine either!

As farming of wheat continued throughout history preferred strains would be favoured and cultivated eventually leading to what it is we bake with today.  The use of yeast in bread-making was something that came along much further in the evolution of bread.   Prior to the use of beer barm, it is believed that fermented dough starters were in use as early 4,000 BC in Egypt and the practice moved north and east from there; Egyptians were the first to ferment dough and bake leavened loaves in clay ovens as opposed to over fires or hearths. Pliny The Elder had documented in 77 AD that barbarians in Iberia and Gaul were skimming off the foam from beer to use it in creating a lighter loaf of bread. The Romans later adopted this method in making their own breads as well. Add the water, olive oil, sugar and yeast into a mixing bowl.  Let it proof for 10 minutes until you can see the yeast start to foam and bubble.  Once the yeast has proven itself active, add in the sourdough starter, flour, salt and mix the ingredients.  I use an electric mixer with a bread paddle on it but good old fashioned hands and elbow grease will do a nice job as well.  Mix the ingredients together until it makes a nice wad of dough.  Form it with your hands to make a nice round loaf and dust it with the semolina flour on both sides.  Place the ball of dough back in the bowl and make sure the bottom has plenty of semolina on it.  Sprinkle some semolina around the sides of the loaf so when it rises the dough will pick it up on the sides as it expands. The reason why we’re doing this is so that the loaf, once risen, will simply fall out of the bowl into the baking dish instead of sticking to it.  Cover the bowl now with a plastic lid or plastic wrap and let the dough rise for 2.5 to 3 hours, or until the dough triples in size.  Note: The dough will only go through one rise! Now go clean the house or watch a few episodes of Two Greedy Italians! Once the dough has risen nicely, preheat the oven to 475 F/245 C/Gas Mark 9 with the empty cast-iron, lidded casserole dish of your choice inside.  I use my Le Creuset french ovens and both the 3.5 quart and 5 quart ovens can manage these loaves just fine. Important!  Make sure that the baking dish you’re using can be heated while empty for 30 mins without damage.  Cast-iron enameled pots with lids (such as Le Creuset pots) can endure this heat well.  Once the oven has reached the baking temperature with the pot inside, put on your oven mitts and remove the pot from the oven and place it on the stove.  Carefully tip the mixing bowl and drop the dough from it into the heated casserole dish.  Put the lid back on and carefully place it back in the oven.  Bake the loaf covered for 30 minutes and then remove the lid and let the top of the loaf brown for an additional 10 minutes.  Once the loaf is done remove the baking pot and let it cool for an hour.  Note: One of the key reasons for dropping the dough into the pot while it is hot is that it does not allow the loaf to stick to the pot whatsoever and the intense heat during the first few minutes of baking gives the loaf an ‘oven spring’ wherein it will grow and expand even further causing lovely cracks and crevices to form on the top during the first stage of baking.

Once the bread has cooled, try it with a bit of butter or some olive oil.  It also goes brilliantly with a nice sharp cheese! 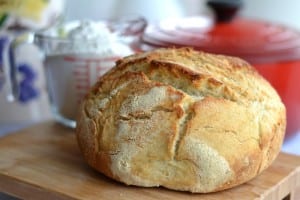 What a wonderful couple of days this was! It was a

‪If I’m going to do this extended housebound C

Relinquish the 'relish', the wine, and the olive o

Slow Sundays are made of this. Lie-ins, toast, cof

Breakfast tastes twice as good when you’ve made

Copyright © 2020 Tavola Enterprises. All rights reserved. No part of this web site including text, photographs, recipes and graphics may be reproduced, distributed, copied, plagiarised, or transmitted in any form or by any means, including photocopying, printing, verbal conveyance, video conveyance, pdf conversion, photographing, recording, or other electronic or mechanical methods, without the prior written permission of the publisher, except in the case of brief quotations, credited/cited appropriately, and embodied in academic papers, critical reviews, and certain other noncommercial uses permitted by copyright law. For permission requests, write to the publisher, addressed “Permission to Use Intellectual Property” at the email address below: