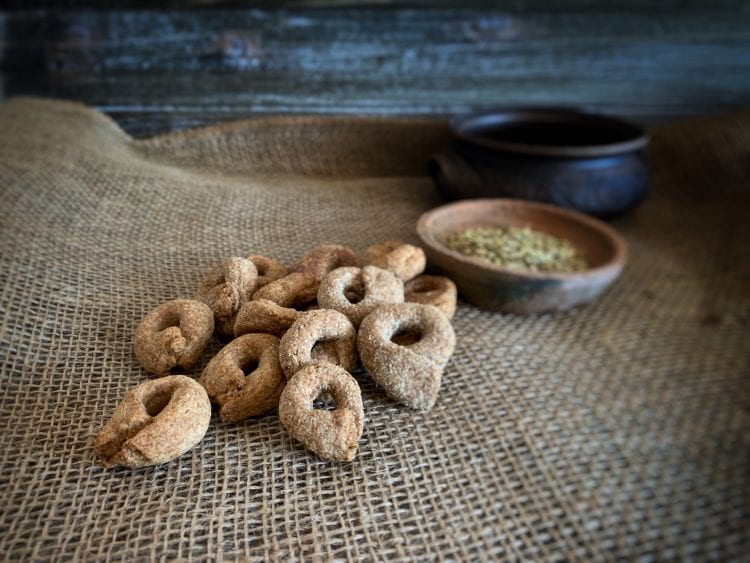 Hey good looking! Whatcha got cooking? How’s about cooking up ancient bread with me?…

There has been a particular theme that has consistently presented itself during my research this summer, and it’s called ‘continuity’. In archaeology, continuity is a term used to connote the unbroken or consistent existence, operation, or fabrication of something over an extended period of time. It demonstrates that a particular typology of material remains can exist in the archaeological record over an extended period of time, unchanged, or perhaps only slightly altered, drawing an archaeological through-line from one particular time period, or culture, to another. It’s a marvelous phenomenon to observe, particularly when it comes to bread!

In all of the years that I have spent researching, working and cooking in Italy, the theme of continuity in bread-making is something that comes up often. You see, Italy has a legacy of bread-making that is robust, regional, and heavily ingrained in its traditional and modern culture. From the tradition of unsalted breads in Tuscany to pardule pastries made on the island of Sardegna, continuity in bread- and pastry-making practices is quite common in Italian culinary culture and it is something that I am truly fascinated with. Why? Because it demonstrates several compelling dynamics: It clearly shows a historic pattern in Italian bread-making wherein the existing methods and recipes were respected as they were handed down generation after generation; it suggests that some Italian bread-making traditions did not change, unaffected by extra-regional exposure or modification, until Italians began moving or migrating between regions more frequently, perhaps towards the time of the Italian unification (1815 – 1871) or even towards the time period when the National railroads were being built from 1861 forward; and it demonstrates the ‘If it ain’t broke, don’t fix it’ proverb in action in culinary methodology — We got it right the first time so there’s no need to change a thing going forward. The tarallo is one of the most shining examples of all of these principles at work.

Taralli are small, unleavened bread rings that originate in Puglia, a region in the south of Italy that makes up the heel of the geographical boot that makes up the Italian peninsula. 2,800 years ago, this region was inhabited by Greek colonists who left mainland Greece to establish their own autonomous city states in other Mediterranean regions. The south of Italy was colonized so heavily by Greek settlers that it was called ‘Magna Graecia‘ by ancient writers such as Strabo, in Geography –Book VI, who tells us that the Greeks fought for and eventually held much of the territory between the Adriatic and Tyrrhenian Seas that we now know as the regions of Campania, Apulia, Basilicata, Calabria and Sicily; the area was thus called Magna Graecia in light of the fact that this area was Hellenized by its inhabitants from 800 BC through to the 4th century BC when the region began to be absorbed into the Roman Republic.

During this time in Classical Mediterranean history, it was commonplace to offer bread to the gods as ritual offerings. Bread was, after all, the backbone of the Classical Mediterranean diet and cereal grains were precious commodities that were highly valued during Classical Antiquity. The offering of bread in a ritual fashion is written about heavily in the ancient Greek and Roman documentary records, for example: Philo, Exodus, Book I; and Varro, On The Latin Language, Book V; and we can see this practice represented in the archaeological findings from a ritual context in The Sanctuary of Oria, in Monte Papalucio (Puglia). The site was in use from the 6th to 5th centuries BC, during the height of Greek colonization in the area, and it is at this archaeological site that carbonized taralli were excavated from a deposit that was originally used to present votive offerings to the Greek goddesses Demeter and Persephone. Demeter was the protectress of grain, harvests and the fertility of the soil, while Persephone, her daughter, was also associated with grain and vegetation. Clearly, these deities had something to do with sustaining life in the area through the food that came from the earth and it was wise to please them with offerings of these small, circular unleavened breads.

Milena Primavera discusses the subject of focacce and taralli as votive offerings in the pre-Roman Salento in her recent article titled: “Pani, focacce e taralli: le più antiche evidenze archeologiche nel Salento antico” (2015). She presents the image below which demonstrates very clearly that Taralli Pugliesi have not changed at all since they were initially made as ritual offerings 2,600 years ago. While the ingredients may have varied somewhat between flour content and herbs or spices, over the following millenia, it is clear that the form has remained identical. One other distinct difference between taralli then and taralli now, is that we now eat taralli as a snack in the everyday and we do not use it as a ritual bread offering anymore… The Eucharist is the modern ritual tradition that carried that Classical Mediterranean practice forward… and we’ll go down that road soon in another article.

So, with this brief archaeological case-study of culinary continuity in Italian bread-making tucked firmly in our brains, and with our own love of bread and cereal grains in mind, let’s make our own batch of Taralli Pugliesi that we can offer to Demeter…. and then snack on as we replay HBO Rome one more time. If you’re ready to tackle the taralli, get your aprons on and throw some wood in the hearth. Here’s what you’re going to need:

Bread for the Gods: Taralli Pugliesi

Now that you’ve experienced culinary continuity in your own kitchen, and you’ve baked an archaeologically-sourced bread product that will nourish you and your family for the next few days,…. why don’t you offer a few taralli to Demeter, to thank her, and our foremothers and forefathers, for the bread that you’ve got on your table every day! Thank the gods! Because if it weren’t for Demeter, Persephone, Ceres, Vesta and the girls…. and early farmers in the Levant and in other Mediterranean regions, we wouldn’t have bread on our tables at all. And if it weren’t for le madri and le nonne in southern Italy who kept taralli and other traditional breads alive for millenia from Magna Graecia through to the modern era… Demeter only knows what horrors we could be enduring during mealtimes today. But seriously, aren’t we lucky to have grocery stores and bakeries bursting at the seams with breads of every variety in such abundant supply? I’d say we have our ancestors and early farmers to thank for this unassuming food item that sits quietly on our counter-tops asking for nothing more than a spot of butter or oil once in a while. Bread is a part of who we are and we, as a species, have been making it for 14 thousand years. So, like le nonne before us, and my late mother-in-law, Helen Dolores Monaco, let’s keep that continuity going, shall we?

Join in the discussion on our Facebook page or leave a comment about this recipe below on this page. If you’d like to chat in person with me or about any of the other recipes, you can join me at one of the The Old-School Kitchen live events taking place at a museum or venue near you. More information about this year’s events can now be found on the Events Calendar page.