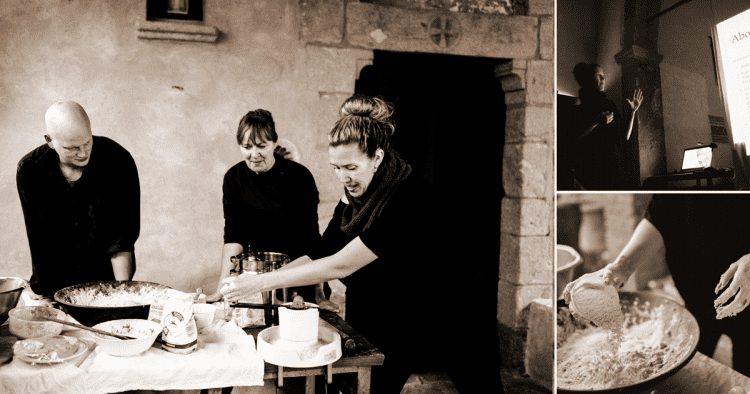 Food archaeologist, Farrell Monaco, is taking the show on the road… in The Old School Kitchen!

“Archaeologist. Baker. Food-Intaker.” Farrell Monaco is an award-winning food archaeologist and blogger who has combined her education with her love for the culinary arts to produce a touring food history public education programme designed to engage the public in the archaeology of ancient Roman food by way of their taste buds!

Farrell Monaco’s academic research centres on foodstuffs, foodways, food preparation, and the role of bread in the daily diet in the Classical Mediterranean. In recent years she has worked as a team-member on Roman food archaeology projects with CEIPAC/EPNet at Monte Testaccio (Rome, Italy); The Pompeii Food & Drink Project (Pompei, Italy); and The Porta Sarno Necropolis Project (Pompei, Italy). Each project has provided critical data and insight into Roman daily life, economy, politics, foodways and cultural identity.

Taking Roman food archaeological data one step further, Farrell is well known for her experimental archaeology projects where she painstakingly recreates Roman recipes using instruction and ingredients sourced from the archaeological, written and pictorial records. When possible, she uses recreated Roman food preparation and cooking technologies as well. Farrell’s method of interpreting Roman food archaeology is unique in that she focuses on the sensory aspects of Roman food preparation itself to better understand the labour involved, the sights, smells, textures and flavour profiles that Classical Romans preferred and were subject to in daily life. In her own words, Farrell uses more than just her eyes to interpret Roman food archaeology data; she uses elbow grease and her taste buds as well. Farrell immerses herself in the interpretive process as the ‘missing human component’, making note of all sensory aspects of the reconstructive process, in order to better understand the original user’s relationship with the food item during the preparatory process, Roman food preferences, common flavour profiles, and the time and labour involved in food preparation in the daily lives of the Romans.

In recent years, Monaco’s research has centred around the bakeries of Pompeii and the iconic ‘Panis Quadratus’ carbonized loaves that were excavated at the archaeological site in 1862. With the blessings of the Soprintendenza speciale per i beni archeologici di Pompei and the Museo Archeologico Nazionale di Napoli, Monaco has been studying the carbonized loaves at the ancient city of Pompeii in an effort to better understand their form, composition, and their role in the daily diet of the Pompeian people in the 1st century AD.  Monaco has also conducted experiments recreating the iconic carbonized loaves in an effort to understand the preparation process, the ingredients, and the behaviour of the form during the proofing, baking and consumption processes.

In 2018/2019, Farrell presented culinary archaeology lectures and workshops to sold-out houses at Terroir Tuscany global food symposium (Italy), the Dallas Art Museum (USA), The Walters Museum (USA), The National Archaeological Museum of Florence (Italy), The Museum of Archaeology at Anzio (Italy), Castello di Potentino (Italy), The Frontline Club in London (UK), and Trinity College Dublin (Ireland). Her research and recreations are published on her food blog, Tavola Mediterranea, which won the Best Special Interest Food Blog Award (Editor’s Choice) by Saveur Magazine for 2019. In addition to this, her body of Pompeian bread and bakery research was awarded the John Wacher Dissertation Prize in Roman Studies (2019) by the University of Leicester. Farrell’s work has been featured online by media outlets such as the BBC, Atlas Obscura, The Guardian, The Ancient History Encyclopedia, Radio New Zealand, and Verve Magazine.

About The Old School Kitchen:

In 2018/2019, Farrell took her experimental work and research findings into the public forum in Italy and the USA as a way to connect her audience with Roman Food Archaeology and reconnect class participants to their food-roots and to food origins in general. The audiences were so responsive that Farrell was moved to develop more public education programming for the 2020 year. Farrell is proud to produce “The Old School Kitchen”, a touring public education programme that continues the immersive process of ‘cooking it old school’ through lectures and hands-on ‘edible archaeology’ workshops for public participants in private, museum, and educational settings. Programmes are available for children and adults and everyone in between!

For existing event dates, see the Events Calendar on this page.

“The Old-School Kitchen culinary retreat at Castello di Potentino was one of the most incredible and memorable retreats I have ever attended. It was both very educational and super fun. Farrell put together the most amazing set of recipes which we got to make daily for lunch — delizioso. The setting couldn’t be any more fitting. The castle, the lectures, the activities, and the recipes were in great harmony and complemented each other well. The retreat takes you back to the Etruscan era but with all the comfort and luxuries of the 21st century. We sat for hours eating, drinking, and having the most interesting conversations. On top of it all, Farrell with her beautiful and gentle manner was always available to answer my questions with her wealth of knowledge. Truly an admirable and inspirational woman. Thank you Farrell for a unique and unforgettable experience.”

“The Old School Kitchen: Etruria was a 5-star experience of my dreams! I’ve been fascinated by the ancient civilizations of the Mediterranean since I was little and studied Classics in college, and this week-long retreat was really an amazing way to not only learn more about the Etruscans and Romans, but to sample life as they might have known it. Farrell is a brilliant experimental archaeologist with a knack for presentation and instruction. Her lectures were always engaging and left me wanting to learn more. Each morning lecture featured the art, writings, and archaeological evidence of different foods and meals had by the Etruscans and Romans. After the lecture, we would hit the kitchen and make the food that we learned about during the lecture for lunch and that evening’s dinner. In the afternoon we had a photo session with food blogger Saghar Setareh who taught us different techniques for using lighting and styling for still-life photography. I consider myself a fairly experienced photographer and I learned a lot from these afternoon photo sessions by being able to experiment and play. We would end the day with a lovely feast of the most delicious foods that we made throughout the day.

The location at Castello di Potentino was dreamy. The owner, Charlotte, was a delightful hostess and shared her knowledge of the history of the castle and the area with such joy. The location really helped me imagine what it would have been like 2500 years ago while I was eating the grape must cakes and drinking defrutum that we had made earlier that day. On our “off” day during the retreat, we had a guide walk us around the property for some foraging and it was really cool to learn about all the different edible plants that were available. We also went to the [I can’t remember the hot springs!] hot springs and saw the ruins of an old bread mill and then soaked our stresses away in the mineral-rich waters of the hot spring. ”

“Farrell spoke at the Dallas Museum of Art as part of our Boshell Lecture Series on Archaeology. With an engaging and relatable presentation style, she described what archaeologists can learn about ancient peoples by studying their food ways and what is known about the diets of communities throughout the Roman Empire. Farrell’s passion and curiosity were infectious as she shared findings from her own archaeological fieldwork researching and recreating ancient recipes. After the program, audience members remarked on how engaging and informative the talk was.”

“Farrell Monaco is a charming and engaging presenter with a deep wealth of knowledge on Roman and Mediterranean foodways.   During our Terroir Tuscany program, Farrell lead our group through the history of Etruscan culture with a focus on the importance of bread.  Her expertise and passion for her subject, gave us a deep insight and appreciation for the importance of this society and the impact they had on the region. What was most interesting is that she took our group through the practical application of this learning simply by recreating and making the bread of this ancient group of people.   With both the academic knowledge and the hands-on experience, it allowed everyone to truly understand the reality of the day-to-day life of the Etruscans.  All Terroir delegates left extremely enthusiastic about her presentation and workshop, with a desire to learn more.“

“Farrell Monaco gave a stunning and fascinating presentation on Etruscan and Roman bread at the Terroir Tuscany Symposium held in the Castello di Potentino this November – with some potentially ground breaking discoveries about leavened bread use in ancient Etruria!  First we had an enlightening talk with excellent illustrations from tombs and some archaeological sites where she is excavating.  Then, she completely engaged us with practical hand’s on demonstrations, grinding flour from the grain and even baked the most delicious examples of this type of bread for us with her special Pompeian yeast called ‘Popidius’ so that we had some little, adorable Etruscan buns wrapped in bay leaves with cumin and grapes with our meals.  Delicious and intriguing. Farrell’s approach to discovering the secrets of the past is based not only on study and field work but on the experience of trial and error with ancient techniques and ingredients – getting your hands into the matter to comprehend texture, observing the reactions of the yeast and reproducing tastes that have not been enjoyed for millennia.  She opened a door into the past through taste with ease and we all were guided skillfully through.“

July 23 – The Civic Museum of Archaeology at Anzio with Giorgio Franchetti (Anzio, Italy)

December 11 – Dinner with the Romans – The Dallas Museum of Art (Dallas, USA)