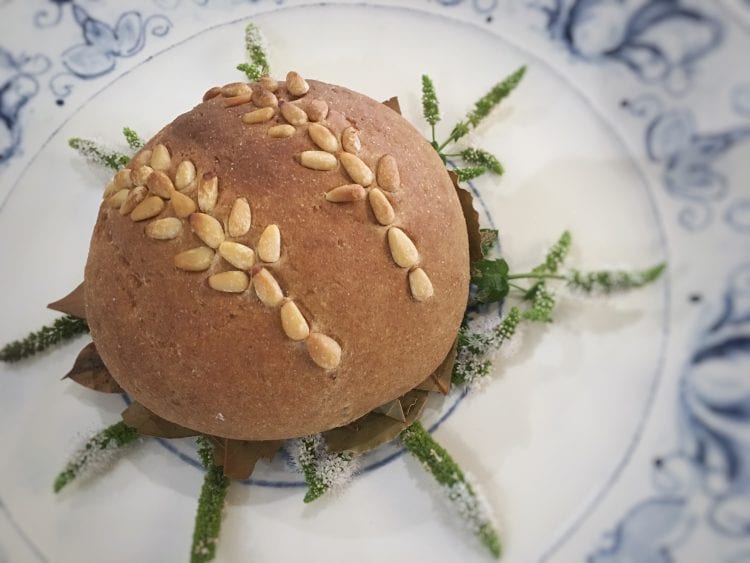 Friends, Romans, Countrymen: Lend me your ears… and your culinary curiosity… because this week’s ancient recipe is a very unique one. It’s Cato the Elder’s recipe for ‘Libum‘ from “De Agri Cultura” and it is, quite literally, like nothing I have ever tasted before and it is delightful! It’s almost like a prototype cheese-cake or a very dense loaf of bread. By eating it warm with a hot meal or by adding warm honey, pomegranate syrup or nuts, you’ve got a very simple and filling Roman food item that adorns the table just as perfectly as it fills the belly. This recipe won’t take much time or elbow-grease to make but what’s interesting about it is the versatility of the basic recipe and the creativity it allows the baker. For this adaptation I tried to stay as close to the original recipe as possible but I took some poetic license in decorating it with pinoli (pine nuts), which we know were in use in the kitchens of ancient Rome. I also dressed the bread with warm honey after it came out of the oven. But before we move on to the recipe and my preparation, let’s have a little bit of history first!

Who is Cato the Elder? Cato the Elder, or Marcus Porcius Cato (Marco Porcio Catone), (234 BC – 149 BC) was a respected Roman senator, soldier, historian and patriot who fought to preserve Roman culture and tradition in the face of Hellenistic influences in the late Republican period. Cato was no different than most Roman soldiers: when he wasn’t serving Rome he was working his land. Cato wrote his manual for agricultural life ‘De Agri Cultura‘ in 160 BC and, similar to his other writings ‘Origines‘ (168 BC), it lends a great deal of insight into Roman history, Roman daily life, and Roman food production. In this manual, Cato included recipes for Libum and Placenta: two cake-like delicacies that were used primarily for religious ritual offerings or special occasions. Libum is the simpler of the two recipes.

What is Libum? Libum is a small bread-like cake that was made of wheat flour and cheese and offered during sacrificial rituals or to household gods on a lararium altar which was present in most Roman kitchens or in the front reception areas of the home, such as the atrium. One reference of liba being used in a ritualistic context is from Horace who states “Quid quaeris? Viuo et regno, simul ista reliqui quae uos ad caelum fertis rumore secundo, utque sacerdotis fugitiuus liba recuso, pane egeo iam mellitis potiore placentis.” Translation: “What do you want? In short I live and I reign, as soon as I’ve left what you acclaim to the skies with shouts of joy, seeing I flee sweet wafers like a priest’s runaway slave: for it’s bread I want now not honeyed cakes.” (Horati Flacci Epistvlarvm Liber Primvs). What’s also interesting about libum is that Christianity has yet to take hold in Rome and does not appear for another 500 years or so, but libum, in it’s bread-like and ritualistic nature, is almost a pagan form of eucharist in pre-Christian Rome. I wonder if there is any continuity here?…

With that said, let’s roll up our sleeves and get ready to taste some ancient Roman history while offering these honey-cakes to our own household gods (you know, the ones who always forget to do the leftover dishes?)… as well as to our families and friends.

Referring to Cato’s De Agri Cultura we read that his original latin states: “Libum hoc modo facito. Casei P. II bene disterat in mortario. Ubi bene distriverit, farinae siligineae libram aut, si voles tenerius esse, selibram similaginis eodem indito permiscetoque cum caseo bene. Ovum unum addito et una permisceto bene. Inde panem facito, folia subdito, in foco caldo sub testu coquito leniter.” Translation: “Make libum by this method. Break up two pounds of cheese well in a mortar. When they will have been well broken up, put in a pound of wheat flour or, if you wish it to be more delicate, half a pound of fine flour and mix it well together with the cheese. Add one egg and mix together well. Then make into bread, places leaves beneath, and cook slowly on a hot hearth under an earthen pot.”

I have chosen to use a strained ricotta for my recipe. You can buy the tubs at your local grocer or you can make your own using my Homemade Ricotta Recipe. I am using bay leaves for this recipe and I am happy that I am as the flavour is richer for it. I have also chosen to bake the loaves uncovered as it ensured that the loaves would cook through all the way as oppose to being steamed under a cover.

Step 2. Mix the wheat flour, cheese and eggs together in a (large) mortar, by hand, or in a mixer. It won’t take long to get a pliable wad of dough. I would not recommend using white refined flour for this dough as the coarseness of whole wheat makes a more durable dough and the flavour of the cake will be stronger once baked.

Step 3. Knead the dough for a few minutes and then let it sit for 15 minutes on the counter to bind and firm up a bit.

Step 4. Cut the dough in half and form into two round boules.

Step 5. Line some bay leaves on the bottom of two non-stick baking pans or on a large baking tray or baking stone. Make sure that there’s enough of a layer of leaves to cover the entire bottom of each boule.

Step 6. Get creative! I decided to adorn my libum cakes by decorating the top using pinoli (pine nuts) which we know were in use in Roman kitchens during the late Republican period. With the first boule I decided to decorate it making chaffes of wheat out of pine nuts. Along with wine, garum and olive oil, wheat was a valuable commodity during Classical Antiquity and it was an essential staple in the Roman diet. On the second boule I decided to be a little bit cheeky while also remaining true to the archaeological record and I made a phallus out of pine nuts to make this boule a Libum of Fertility. Why not, right? Those of you who have been to Pompeii or have studied Roman artefacts are well aware that the phallus was a ubiquitous symbol that connoted fertility, the divine protection of Fascinus, and good fortune. …And sometimes they just pointed the direction to the nearest brothel!

Step 7. Place the each boule on top of the bay leaves in and bake uncovered for one hour. Watch the top and sides of the bread at the one hour mark to ensure that they are golden brown. Do no take it out any earlier than one hour as it has to cook fully on the inside. The loaf is very dense and needs to bake for this length of time to ensure a cooked inside.

Step 8. Remove from the oven after 1 hour and let stand until they’re warm to the touch. These cakes will cut beautifully with a sharp knife and are best served fresh with warm honey poured on top or served on the side for dipping. Don’t forget to remove the bay leaves before serving!

The end result for this libum recipe was a delightful surprise. It’s not complicated and it’s not fancy, by any means; it’s a humble little cake but the texture and wholesome flavour is what makes you want to cut that second piece. The flavour of the bay leaves combined with the cake and honey is so full-bodied, so natural, earthy and pleasing. It tastes like you would expect the Mediterranean to taste like 2,000 years ago. Give it a go and taste the history for yourselves… and if you end up making a Libum of Fertility yourself and the gods smile on you, make sure to let us know!

Please feel free to rate and leave comments or suggestions about this recipe below.

Cena Bene and good eating to you! 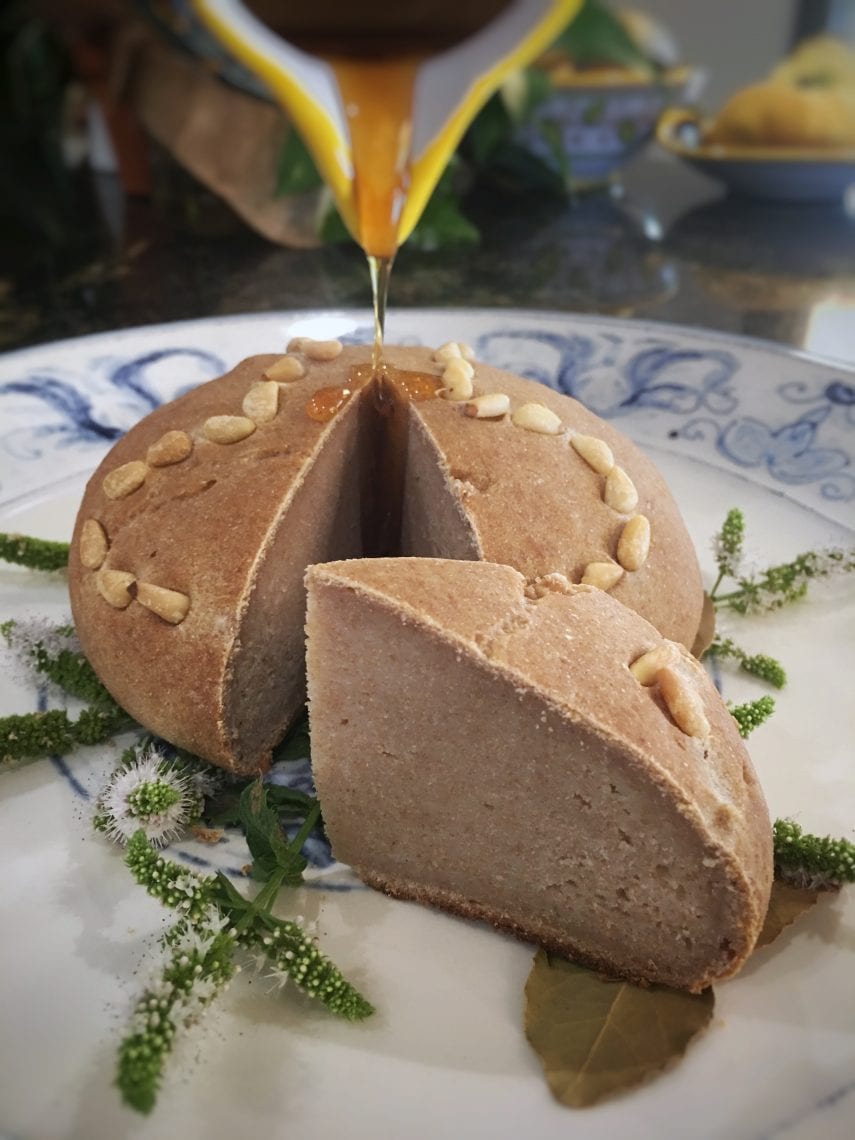