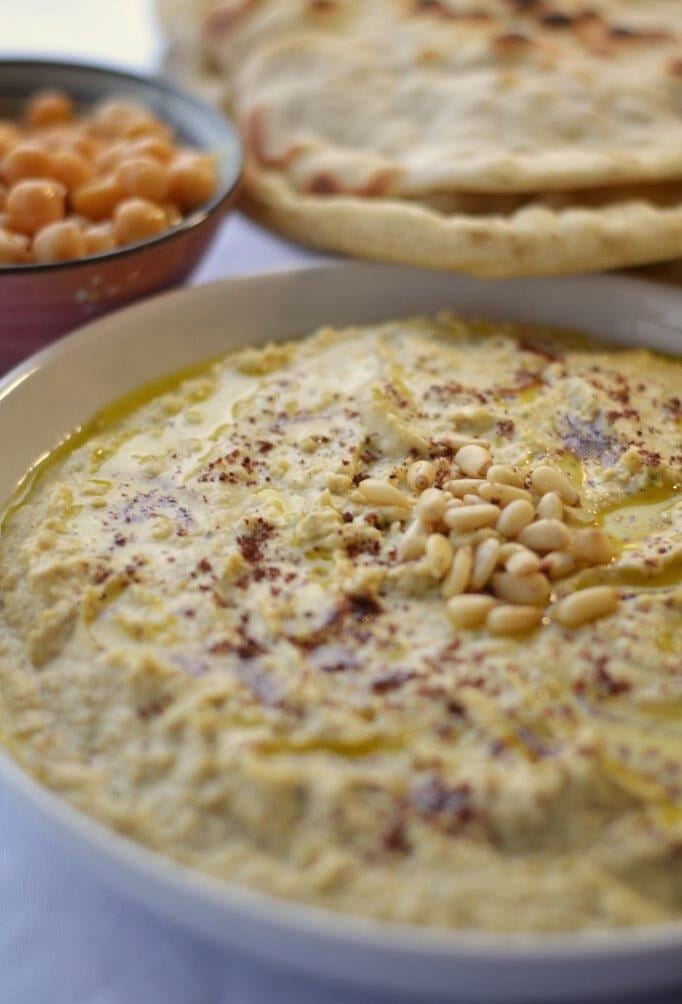 It’s summertime, and you know what that means… It’s time for hummus! And what goes better with hummus than with a side of laffa bread or taboon?! Personally, I can eat an entire order to myself, it’s that satisfying. You will too once you taste this recipe, but first… let’s have a bit of history about bread an chick peas, shall we?

Wheat has been a staple in the human diet for over 10,000 years and evidence of wheat cultivation can be dated back to 9,000 BC in the Levant or what is now known as Iraq. Prior to this wild wheat, emmer and barley were used to make primitive breads. It was when early hunter/gatherers learned to grind wheat and other cereal grains that our love of bread was born. Originating in the Levant (or the regions now known as Syria, Jordan and Israel) and in the Nile Delta, wild emmer was the first cereal grain to be domesticated. Being a coarser and heavier grain, it would have produced a very filling and unleavened loaf in it’s time.  As farming of wheat continued throughout history preferred strains would be favoured and cultivated eventually leading to what it is we bake with today.  Grain mills, such as the one pictured below (Ostia, Italy)  have been found by archaeologists scattered across the Mediterranean.  They were used to mill cereal grains used for cakes, porridges and breads.

The use of yeast and leavening agents in bread-making was something that came along much further in the evolution of bread. Pliny The Elder documented in 77 AD that barbarians in Iberia and Gaul were skimming off the foam from beer to use it in creating a lighter loaf of bread, he also noted that leavening agents first being used in Roman breads coincided with the conquering of Macedonia for the Empire in the 2nd century BC. The Romans thus adopted leavening agents in making their own breads as well.  It is believed that fermented dough starters were in use as early 4,000 BC in Egypt and the practice moved north and east from there.

Hummus is the quintessential summer snack or dip that goes brilliantly with bread, crackers, vegetables, salads and sandwiches.  If you don’t know what hummus is, you haven’t lived yet. But don’t worry! Life’s about to get a whole lot better once you add this recipe to your repertoire.

Hummus is an Arabic word that means “Chick Peas”.  When said chick peas are combined with lemon, garlic, olive oil, tahini and other spices you have a levantine dip that is historically very ancient yet also very popular on the modern table today.

The chick pea had been used as a human food item by hunter-gatherers for tens of thousands of years and was then cultivated around 7,000 years ago in the Middle East.  It was one of the earliest crops cultivated in Mesopotamia and was a common street dish in ancient Rome.  Supposedly the Roman philosopher, Cicero, was named after an ancestor who had a wart on his nose shaped like a chick pea. The word for chick pea in Latin is Cicer arietinum.  Poor Cicero.

Anyways!  Back to hummus.  What I absolutely love about hummus is that it’s a plant-based food that’s safe for the vegans and vegetarians, but it’s far from boring!  It packs such a punch and is so pleasing to eat.  When made correctly it should be a thick and creamy consistency with enough hints of lemon and garlic to make you want to finish off the entire bowl in one sitting.

For this post I have decided to feature hummus served with traditional laffa bread, or taboon in some regions of the middle east.  Laffa bread is a middle eastern leavened flat-bread that is a very popular street food in the eastern Mediterranean.  The recipe is so simple you can memorize it. Laffa is prepared by frying the dough in a pan after it has been left to rise. The end result is a wonderful, blistered, chewy flat-bread that goes perfectly with fresh hummus.

Prepare the laffa bread first by proofing the yeast in the warm water.  Do so by adding the oil, sugar and yeast to the warm water and leave it sit for 10 minutes.  If a light beer-like foam starts to appear on the surface you know you’re good to go…  The yeast is alive!

Add the flour and salt to the water and yeast and slowly roll it all together with your hands.  Alternatively you can be cheeky and use a bread-maker on the dough setting.  Once the dough is mixed well, cover it and let it rise for 1 to 1.5 hours until it doubles in size.  While it is rising, prepare the hummus.

Combine the cooked chick peas and all other ingredients for the hummus in a food processor and blend until it’s smooth and creamy.  Scoop it out into a serving dish and cover it while waiting for the bread to finish rising.

Okay! Back to the laffa bread.  Once it has doubled in size cut the dough into six equal pieces. *Important*  Flour your rolling surface well and keep a bowl of flour on the counter to dust your palms with.  The dough will be very soft and sticky. Heat a frying pan to just over medium and add enough oil into the bottom to lubricate the surface well. Roll your first section of dough into a flat circle on the floured surface.  Once the pan is hot, place the rolled dough into the pan.  It should puff up and blister almost immediately.  Keep a set of tongs handy to lift and check the bottom.  It should take about 1.5 minutes to brown the bottom.  Flip the bread and fry the other side for approximately one minute or until the blisters start to brown.  Repeat with each section of the dough until you have six fresh, warm pieces of laffa bread. Oil the pan as often as needed to keep the surface well lubricated.

Hummus: Uncover and serve. Optional: Drizzle it with a tablespoon of olive oil and dust it with sumac to give it a splash of colour and a stronger flavour.

Laffa Bread: Serve as is or cut each flat-bread into strips for dipping into the hummus.

Be’te-avon!  Good eating to you…

Please feel free to comment about this recipe below.