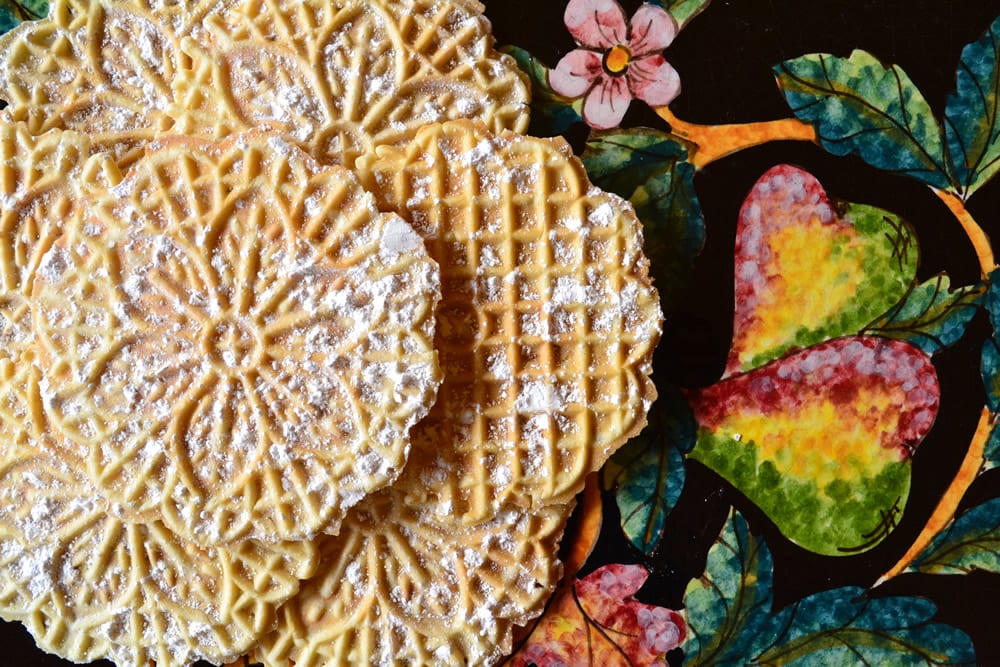 When I met my husband, one of the first things he told me about himself was that he was from a large Italian family that appreciated food. He told me that his mother, Helen Monaco, had raised him and his nine siblings cooking from a repertoire of Italian recipes that was comprised of time-tested tradition as much as it was of love. Hearing about my late mother-in-law (whom I never did have the good fortune to meet) and the pride that she took in her cooking and the raising of her children reminded me of something that Chef Antonio Carluccio once said:  To feed someone is to show them love and that ‘anyone who produces food, produces love’ (Two Greedy Italians, 2011). From pasta and meatballs to wedding soup and pizzelles, I believe that Helen Monaco’s cooking was truly a testament to this idea.

Helen Dolores Monaco was born to William and Josephine De Franco in Wierton, West Virginia in 1919 and she married Daniel Albert Monaco in 1946. As was Italian tradition at the time, the newlyweds received a pizzelle iron as one of their wedding presents. This iron would figure prominently in Helen’s cooking, as well as in the memories of her family, in the years that followed. The iron was manufactured in Cleveland, Ohio in 1945 and was a wood-handled, cast-iron model that would have been heated over a gas stove. Perhaps the most charming aspect of the iron was the imprint on the inside face of a couple, facing each other and toasting over glasses of wine; the picture of two people joining their lives to build a future and a family together. Helen Monaco used her wedding pizzelle iron regularly and it was just one of many cooking implements that she used to feed her family. More than half a century, and many grand-children later, it was the chance discovery of her wedding pizzelle iron by her youngest son, Tony, that inspired this post and a curiosity about the history of the pizzelle in Italian food culture.

The pizzella, or ferratella, originated in the Abruzzo region of Italy, some historians say as far back as the Middle Ages.  Often passed down from one generation to the next, the iron itself was a piece of family property that was often engraved with images or crests that were associated with the family or the matriarch of the family. The original pizzelle irons would have had long handles and would have been heated over a hearth prior to use. A dough mixed with flour, sugar and eggs would be mixed and spooned onto the hot iron face and then held tightly together over the fire until the pizzelle was formed, golden brown and crispy.

In the old country, the pizzelle is historically linked to a feast that celebrates divine intervention and the expulsion of evil: The Festival of the Snakes (Festa dei Serpari). Perhaps each family in the village was represented by their blacksmithed pizzella design to show the forces of evil that nothing could destroy them? The Church also adopted pizzelle-making tradition at some stage as the feast of Beato Roberto, a 12th century monk, continues to use the pizzelle to this day as a symbolic food item to celebrate the monk. When we consider the formation of rural villages around churches and monasteries that took place in the late medieval period in Italy, it is not difficult to imagine that families living grouped together may have tried to find ways to distinguish themselves and their achievements from one another. Perhaps each of their own specific pizzella crests on their family irons was a way of marking a food offering to the church with a symbol denoting which family it came from? After the influx of Italian immigrants to America in the 1800s and 1900s the role of the pizzelle on the Italian table still maintains the origins of these associations: the celebration of marriage, unity and family.

So let’s try Helen’s pizzelles shall we?

We made these pizzelles using the recipe that was found folded and clamped inside Helen’s pizzelle iron.  Deciding against using the iron, for fear that we might damage it or break the handles, we used a conventional, modern electric pizzelle iron by Cucina Pro instead. Once plugged in it took only a few minutes to reach full heat. If you are using your Nonna’s old-fashioned pizzelle iron, give it 5 minutes over a gas flame on each side and test its heat with a few drops of water before you start pressing. While heating your iron, place all of the batter ingredients in a mixer and blend well. We have posted two identical recipes, one for lemon pizzelles and one for fennel pizzelles, as my husband and his brother, Tony, could not stop arguing about which one was Helen’s favourite recipe! So you decide which one is your favourite and prepare your batter! Then it’s time to get your iPhone or stopwatch ready. You’ll need to time each pizzelle press carefully so you don’t undercook or burn the wafer.

Using a tablespoon, measure out a rounded dollop of batter and place it slightly above the centre of each pizzelle design base.  Clamp the iron down and hold the handles shut for 45 to 55 seconds. You’re going to have to wing it a bit to get used to placement and timing. This is an art, and it’s not an easy one. Your first batch or two may look like a four-year-old made them…. But that’s okay! They’ll still taste good. Getting the batter distribution correct is an exercise in trial and error but you’ll figure it out.

When removing the freshly pressed wafer from the iron, use tongs to place them on foil or parchment paper on a flat surface. They will dry and harden very quickly.  Any excess batter overflow or sloppy borders can also be cleaned up during the drying phase.

Once the pizzelles are dry and cool to the touch, sprinkle with powdered sugar and enjoy! Most importantly, take the time to make and enjoy these pizzelles with your family, your spouse or your kids. Roll your sleeves up and get in there together and celebrate the pizzelle for what it symbolizes: togetherness and love. It’s easy to understand that we derive pleasure from so many aspects of food be they flavour and consistency or presentation and colour. But let’s not forget that in addition to these pleasing elements there is another aspect of food that many of us savour particularly when we prepare old family recipes: sentimentality.  Gustatory and olfactory triggers from food preparation and consumption conjure memories of loved ones, family dinners or specific places that made strong emotional impacts on us in the past.  It is in this experience that food becomes much more interesting to us than something that simply tastes good or is presented in an artful manner; food is highly sentimental. This was more than evident to me after my husband and brother-in-law tasted these pizzelles, Helen’s pizzelles, once again decades after they had tried them for the first time as children standing behind her while she made them over a gas stove. The smiles on their faces and the arguments that ensued regarding fennel and lemon zest made it clear to me that these pizzelles meant much more to my husband and brother-in-law than just a tasty sweet. It was their childhood, their family and the love of their mother represented through a food item that brought just as much joy to them in that moment as it did when they were 10 years old.

Buon Appetito and good eating to you!

This post was written in memory of Helen Monaco (1919-2008) and the love that she gave to her family through her cooking. 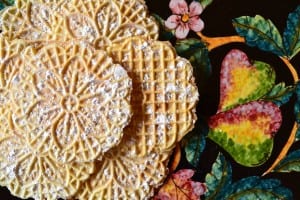 4 comments on “Helen Monaco and Her Pizzelles”

Me and my main man, Father Tiber. What I’d give

This week’s experiment falls under the category

Also... the entire recording is now up for the Anc

Salvete Pistores! If you haven't signed up for nex

This morning’s basil haul. What to do with it?..

This photo was taken in Piazza San Pietro during m

In Roberto’s kitchen in Rome. The picture of sum

Copyright © 2020 Tavola Enterprises. All rights reserved. No part of this web site including text, photographs, recipes and graphics may be reproduced, distributed, copied, plagiarised, or transmitted in any form or by any means, including photocopying, printing, verbal conveyance, video conveyance, pdf conversion, photographing, recording, or other electronic or mechanical methods, without the prior written permission of the publisher, except in the case of brief quotations, credited/cited appropriately, and embodied in academic papers, critical reviews, and certain other noncommercial uses permitted by copyright law. For permission requests, write to the publisher, addressed “Permission to Use Intellectual Property” at the email address below: