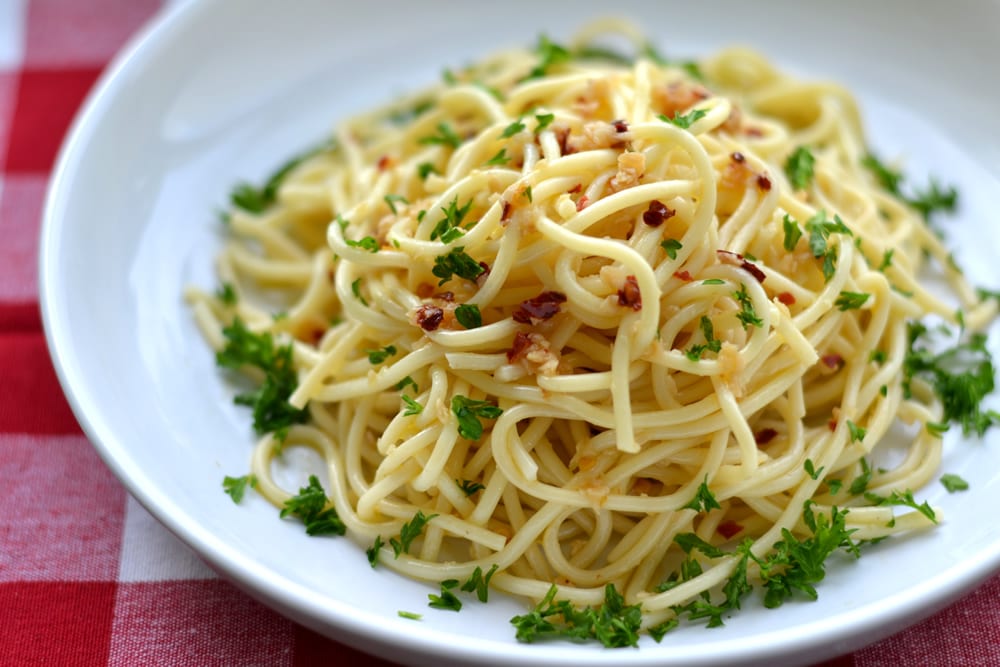 Okay readers! Bookmark this game-changer in your browsers. Here’s a recipe that you’re going to want to have on hand for a special day.  This recipe is what prompted my husband to ask me to marry him.  To this day he asks me to make it every Sunday night for him. Trust me, this is a timeless Italian pasta recipe that you’ll turn to more often than that box of red wine you hide in your pantry… So! If you’re trying to catch a spouse, here’s the way to make it happen!  But first, a little history:

Who doesn’t love garlic, and lots of it?  I know I do.  It resembles a leek or a shallot but packs much more of a wallop both raw or cooked.  Dating back 6,000 years, its origins are in Central Asia and it has long been a staple in Mediterranean cooking.  Historically, the Egyptians also used garlic for medicinal purposes in addition to a food item.  Sounds similar to Grandmother’s garlic poultices, doesn’t it?

In the modern era, there was a time when garlic was regarded as a low-class food that would never grace an upper-class plate.  In America, at the turn of the 20th century, garlic was considered to be a food of the lower classes that was used in immigrant communities. Today, Americans alone cook with more than 250 million pounds of garlic a year.

Chili peppers have been a part of the human diet in the Americas since pre-contact times prior to the 15th century. Christopher Columbus imported chili peppers back to Spain and Portugal where it was used by monks for cooking and medicinal purposes.  Diego Alvarez Chanca, a physician on Columbus’ second voyage to the Americas, was one of the first to record and study chili peppers and their medicinal qualities. Gleaning some information now from my favourite chef of all-time, Antonio Carluccio, we look at a brief history of pasta: No one knows where pasta really originated. Some suggest Marco Polo brought it to Italy from the orient, others suggest is was an old technique created to allow flour to keep (in lasagna-like sheets) over the winter without going bad. Pasta, or ‘maccaruni’, as it was once referred to in old-world Italy, is a staple that the Italians have taken to a creative and comfort level that is world-reknowned. So many shapes and sizes; so much love on one plate.  Carluccio notes that at one point pasta was a food for noble Romans and then gradually through the centuries it became a food associated with Cucina Povera, Poor Man’s Food. This is an interesting observation as this very recipe for a simple spaghetti tossed in oil and garlic is also considered Cucina Povera, but you’ll see it priced at a pretty penny in a lot fine dining establishments in North America. It seems that pasta is on the upswing again for those with ‘refined’ tastes… Now aren’t you glad you’re going to know how to make this in your own home now? Let’s get started, shall we?

Put a pot of water on to boil for your pasta and get a standard box of 500 gram (1 pound/16 oz) of spaghetti ready for the water but you’re ONLY going to use 2/3 of the box ! Once the water has boiled drop the spaghetti for 11 minutes only.  Check the texture at 10 minutes to make sure it’s still a bit chewy. By 11 minutes it will be al dente, the perfect texture.

In a small saucepan, combine the minced garlic cloves, chili peppers, salt and olive oil.  Heat on medium/low for approximately 5 minutes or until the garlic turns a golden shade, the salt is dissolved, and chilis are sweated. Keep a close watch and keep stirring!  If the oil bubbles or pops, turn it down. If the garlic gets too dark, the oil will have a bitter taste.  Do not let the garlic go too dark. Once the garlic is golden, turn the heat off and let the oil cool for a few minutes. Strain the spaghetti after 11 minutes on boil and place it into a large serving bowl. Pour all of the sauce over the spaghetti and toss it evenly with tongs. Garnish with diced arugula and grated pecorino romano.  Serve at the table and watch the marriage proposals pour in!

This serving size makes a perfect side dish for four people or a hearty entree for two. Double the order to make a family-size portion for four as a main dish. Add a side of fresh baked bread to round this meal off perfectly and to clean up excess sauce after the spaghetti is gone.

Buon appetito! Good eating to you …and your future husband or wife!

Please feel free to post comments or suggestions about this recipe below, …or send us pictures of your engagement rings.  🙂 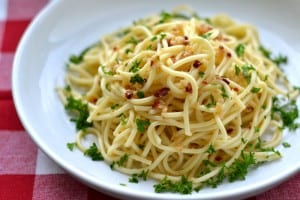