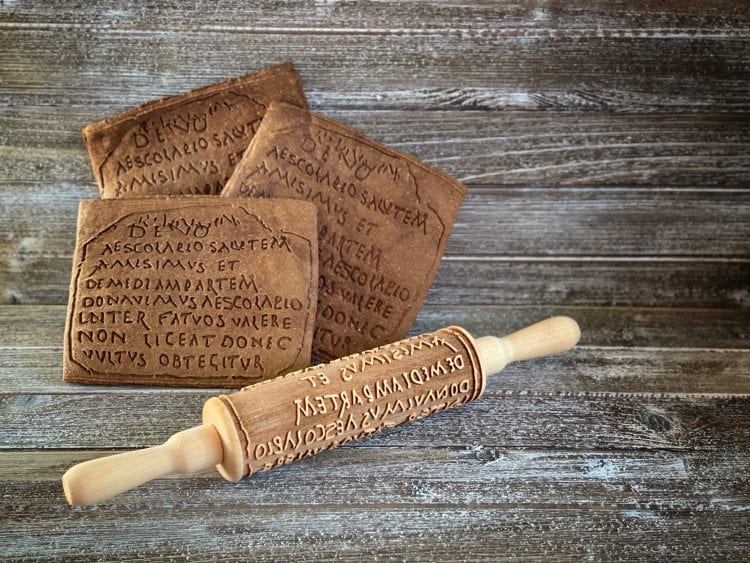 Jump To: About the Pin | Gingerbread Recipe | Buy the Pin

Good day, good reader! How are you doing? I hope that you and your friends and family are faring well in this 11th month of ongoing COVID-19 restrictions here on planet Earth.

So, the strangest thing happened this week at our property in Malibu, California. My husband discovered that we had an irrigation leak in our backyard and I was tasked with having to dig the line up and find the leak. Given that I am an archaeologist on forced pause who missed a field season this summer, I was more than happy to dust off my trowel and dig up the back garden! So off I went… A few hours into my irrigation excavation project, I came across something very unusual! As soon as I spotted it, I immediately stopped digging. I stood up, blew my whistle, and called the rest of my team over. Well, I called my husband and my neighbour, Larry, over… and the three of us surveyed the find together.

Lying in the dirt, in our backyard, was a slab-like object with a Latin inscription on it… in California! At first glimpse, it resembled a Roman curse tablet, similar to others that have been excavated throughout the former Roman Empire. This unusual find really excited the heck out of me! It reminded me of that one time, back in the early 90s, when that guy found a real, live caveman in Encino when he was digging his pool! Do you remember that? What an incredible find that was!

Upon further inspection of the slab in situ, I felt that this was an epigraphic find of a very important nature. One that could possibly change our understanding of American history in a very dramatic way! I mean, ancient Roman contact in California? We have never heard of anything like this before with exception to a 2nd century Roman terracotta head found outside Mexico City under a pre-colonial building dated to between 1476 and 1510 AD. But before I could call the LA Times to tell them about my incredible find, my husband alerted me to something even more exciting: the slab was made of…. gingerbread.

Much like the Eyguieres Curse Tablet below, which isn’t made of gingerbread but sure looks like it is, the tablet found in our back garden featured several rows of text impressed into the surface of it. So what is a curse tablet, and why was one buried in our back garden?

Curse tablets, or tabella defixionis, are small metal sheets that were used in the Greco-Roman world for several reasons. Sometimes they were used to appeal to a god in the expression of anger, or with wishes of revenge, following being wronged or slighted by someone else. They were sometimes used in the pursuit of love and sex as well. For the most part, they were used for making a special request of the gods or cursing someone who has wronged you, betrayed you, or stolen from you. So who was being cursed on the tablet in our garden?

What the text said on the tablet in our garden was a mystery to all of us, so I called my friend Nathalie, a Latin teacher, to take a look. This is what was inscribed on the mysterious tablet when translated into English:

“To the god Aesculapius: We have lost our health and given half to Aesculapius. Among those who are silly do not guarantee health until their face is covered.“

Hmm… That’s rather interesting, isn’t it? It sounds almost as if it refers to illness or a plague, which the Romans were very familiar with, and it definitely followed the format of a standard Greco-Roman curse tablet: Addressing the god, stating the problem, offering a gift or a cut, and then making a request. And the tablet is cursing people with uncovered faces? How oddly familiar that sounds….. And who is this Aesculapius, then, and what did he have to do with health?

Asklepios was the Greek god of medicine and healing whom was eventually adopted into the Roman pantheon as Aesculapius or Aescolapio, Aesculapio, Aescolapio Merre, Asclepius, Aesculapius Merre. Pictorial and sculptural representations of Aesculapius are often accompanied by a rod and a snake which is a symbol that still remains in imagery associated with modern medicine. Aesculapius became such an integral part of ancient Roman religion that a temple was erected in his honour in the heart of early Rome on the Tiber Island. Livy tells us:

Trans.:”When the state was troubled with a pestilence, the envoys dispatched to bring over the image of Aesculapius from Epidaurus to Rome fetched away a serpent, which had crawled into their ship and in which it was generally believed that the god himself was present. On the serpent’s going ashore on the island of the Tiber, a temple was erected there to Aesculapius.“

A hospital is now situated on the Tiber Island where the sanctuary to Aesculapius once stood, which continues the theme of health and wellness into the modern era. Further to the literary evidence cited above is epigraphic evidence of appeals being made to Aescolapio on dedications such as the one below, which was written in both Archaic Latin and Greek, found on the bronze base of a column in Sardinia, dating to 150 BC:

Trans.: “Cleon, servant of the Associated Company of Salt-farmers, bestowed this gift willingly and deservedly on Aesculapius Merre the well-deserving.”

…and this dedication inscribed on a pedestal of stone found in the Tiber river in Rome, Italy, dating to the 3rd century BC:

Trans.: “To Aesculapius; a gift bestowed willingly and deservedly by Marcus Populicius son of Marcus.”

So, this Aesculapius cat was serious business and if Rome erected a temple to him on the Isola Tiberina during a pandemic, he must’ve been very good at his job. So why the heck is a curse to Aesculapius buried in our back garden? Perhaps to remind us that during times of pestilence, the past will often tell us what problems to expect when we experience similar troubles in our own era.

We are now in the 11th month of weathering the COVID-19 pandemic and despite all of the measures we have taken, from social distancing to hand sanitizing, this pestilence still has us all firmly in its grip. In July, we rose to the occasion here on Tavola by committing to make some small sacrifices in our lives and by offering edible Pharmakoi to the gods, for additional coverage. But case numbers are climbing and it looks like we may be in for a really tough winter ahead so the time has come to up our game and bring out the big gun: the curse tablet. The words on the curse tablet excavated from our back garden made such an impression on us that we felt they may make an impression on you as well… moreover, they have the potential to make a pretty decent impression on our holiday baking as well! So I did what any homebound classical archaeologist would do after a year of being restricted from travel because of the COVID-19 virus: I decided to spread the good word that I found in my back garden by creating The COVID Curse Tablet Rolling Pin… A tablet that appeals not only to the gods but to your sweet tooth as well.

Now, we aren’t really going to curse anyone; that’s not how we roll here at Tavola Mediterranea. We wish health and wellbeing for everyone. But we are going to ask for Aesculapius’ help in getting some of the maskless masses to wise up and mask up and we’re going to do it in a very clever way:

Typically, curse tablets in the Greco-Roman world are offered by burying them in the earth or by tossing them down a well. We are going to ‘offer’ our gingerbread COVID curse tablets by tossing them down our gullets instead! And down the gullets of the maskless among us as well… but they’ll never know they’re being ‘influenced’ by a biscuit as they’ll just think it’s more of your delicious Christmas baking! Who knows! Maybe it will work! If not, at least someone got a nice slab of gingerbread with an ancient writing system on it for the holidays!

When working with this pin, be sure to use my gingerbread dough recipe developed for the Cuneiform Gingerbread Tablets article published in 2017. The dough is firm, delicious, and when working with it chilled, it will take the impression from the pin beautifully without the dough sticking to the pin. Follow the instructions and it will not fail!

Remember to have some fun this winter, no matter how hard things get. We can do this and we will do this, just like our foremothers and forefathers did for millennia before us… with a curse or two and a few laughs along the way. Now go start your gingerbread dough! We have a pandemic to fight!

Buy your own COVID Curse Tablet Rolling Pin here and get rolling today:

Disclaimer: The discovery of the gingerbread curse tablet, and the text on The COVID Curse Tablet Rolling Pin, is fictitious and has been created purely for entertainment and culinary purposes. It’s a joke. What is not a joke, however, is the COVID-19 virus. Don’t be silly. Wear a mask. You’re not the first person on this planet who has been asked to do so.

If you enjoyed this post, join the conversation on our Facebook, Twitter and Instagram pages! Visit the Tavola Shop to see other rolling pins featuring ancient writing systems. Thanks for reading and keep cooking it old school!