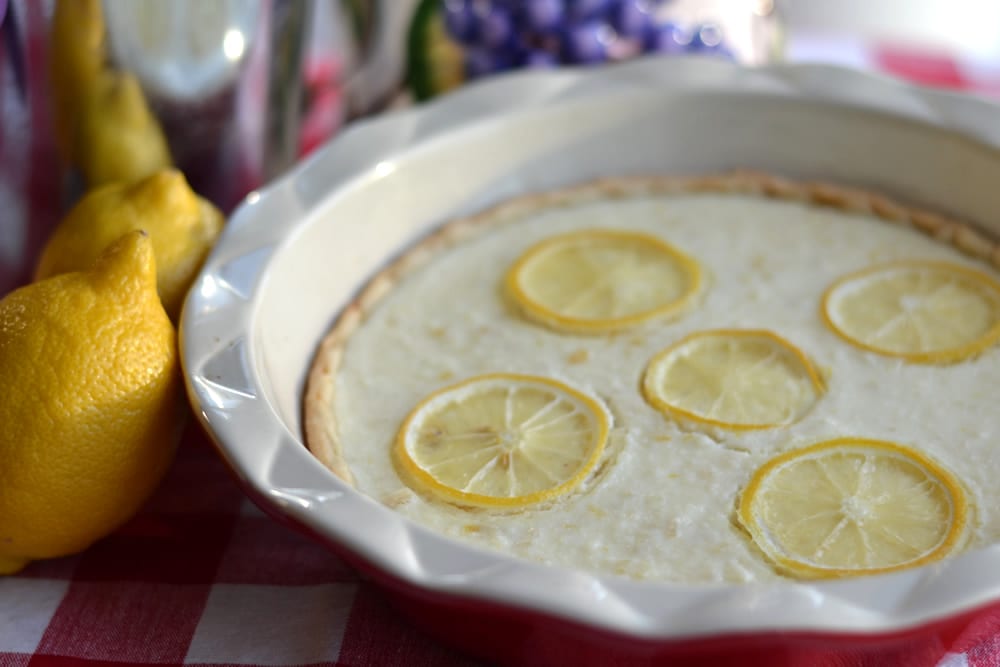 The culinary use of lemons is often limited to garnishes, desserts or liqueurs. But this citrus fruit can do so much more than simply flavour water and liquor and it was eating and cooking in Ravello, Italy, that taught me this. The Amalfi Coast isn’t just home to beaches, sun and sand; this area is an agricultural region that produces lemons for the Italian and European markets. Everywhere you turn you’ll see the image and presence of the mighty lemon, but this isn’t just any type of lemon, this is the limone sfusato: a type of lemon that is grown only on the Amalfi Coast that boasts a size and flavour that is unrivalled the world over.

To highlight the crown jewel of agriculture in this region, and to celebrate summer on the Amalfi Coast, Tavola will be posting a week’s worth of recipes featuring lemons under the title of “A Week in Ravello”. This recipe is one of the seven included in this series. These recipes were created using ingredients picked from the gardens, bought from the markets and pulled off the fishing boats by the beautiful people who work and live year-round in this region. If you have an opportunity to try these recipes don’t hesitate to use lemons that you can find at your local markets wherever you are in the world. But if you find that one day you can make the trip to the Amalfi Coast, be sure to try these recipes out using the real limone sfusato.

I chose to add this recipe to my series featuring limone sfusato after seeing Antonio Carluccio and Gennaro Contaldo make it on their TV series ‘Two Greedy Italians’ on BBC 4.  If you have not had the pleasure of seeing this TV show yet, I highly recommend that you look for it on your cable guide or beg your provider to start airing it.  ‘Two Greedy Italians’ truly stands out as a cooking show that will hopefully lead food-broadcasting in the direction it should have gone in a long time ago. When most cooking shows are comprised of obnoxious cooking competition gong-shows and narcissistic restaurateurs having temper tantrums, it’s nice to see a gem like ‘Two Greedy Italians’ calmly walk out onto the stage and show the rest of them what the real message is: Food is a part history; food is a part of cultural change; and food is also what brings people together. In the episode ‘Poor Man’s Food’, Antonio and Gennaro go back to Gennaro’s hometown of Minori, which is located down the hillside, just below Ravello, on the Strada Statale Amalfitana.  Not only did this episode demonstrate the use of limone sfusato in the regional recipes, but it also gave the viewer an uncensored look into the more recent history of the Amalfi Coast when poverty, if not driving its residents away entirely, resulted in very minimal and economical styles of cooking.  La Cucina Povera is a very real example of how sourcing local food-stuffs was at one time a necessity, not just a food-trend or something our fore-mothers and fore-fathers did to lessen their carbon footprint.  Poor man’s food was the harsh reality for most of our grandparents during the depression and it’s important that we do not forget the contributions these simple recipes made to modern cuisine.  What this episode showed us was that these recipes give us so much more than a dinner served up in a Zagat five-star rated restaurant would.  Why?  Because they were made with one ingredient that you’re usually not going to find behind any hot line these days: Love.

This recipe itself comes from the repertoire of Antonio Carluccio and it is, hands down, one of the greatest desserts I have ever tasted.  It would not be hard to put this tart together on a budget as the ingredients are fairly simple and can be sourced locally;  the ricotta could even be made by boiling milk on the stove.  The surprising aspect of this recipe is that it is as bold as something you’d expect to taste in a boulangerie in Paris, yet the simplicity of the natural flavours of the lemon and ricotta also boast a gentle, traditional, Italian charm.

So let’s make it, shall we?

The first thing you want to start is candying your lemons. Slice the lemons as thinly as possible; I used a mandolin to slice mine. Bring the water and sugar to a boil and drop in the lemon slices, reduce the temperature to low and simmer for one hour. Note: Remaining candied lemon syrup can be kept in the fridge and used for the Lemon Granita recipe!

While the lemons are simmering, it’s time to prepare the pastry dough. You can skip this step by being cheeky and buying ready-made pie shells but if you want to make your own, just keep following along… Prepare the pastry dough by cutting the butter and milk into the dry ingredients in a large mixing bowl or in a food processor. Do not heat or warm the butter, cut it into the flour mixture and let it blend and warm as you go. Once the dough is formed, cut it in half and wrap each piece in plastic wrap or place into a ziplock bag. Set aside in the fridge for 30 minutes and begin preparation of the lemon and ricotta filling.

To prepare the filling we want to return to the candied lemons and strain them out of the pot of water with a spoon or a colander. Keep the remaining syrup for use in another recipe, if you like.  Dice the lemons as finely as possible in a food processor or by hand with a sharp knife. Set aside to cool.  In a mixing bowl add the egg whites and sugar and whip the mixture until it thickens and peaks begin to form if you touch it with your finger.  Once the egg whites and sugar have formed a thick mixture, add in the ricotta, 5 beaten egg yolks, and the diced candied lemon. Fold it together gently and let the filling stand as you prepare the pastry shells.  Note: Antonio used ricotta and mascarpone in his recipe but I kept it to straight ricotta to keep it simple as some people may not find mascarpone at the shops as easily as they’ll find ricotta.

Return now to your pastry dough by rolling each half out as circular as possible and placing them into the pie-plates.  Trim any excess dough off and create a small lip around the upper edge by rolling the edge in and pinching it as you go.  Divide all of the lemon and ricotta filling evenly between the two shells. Antonio dusts his tarts with lemon zest after they have baked and cooled, and you can do this too.  I, instead, take a few finely sliced lemons and place them onto the pie filling itself before baking. Brush the top and crust with the remaining egg yolk and bake for 30 minutes or until the shell is golden brown.

Let stand and cool for a few hours and then serve.

Buon Appetito!  Good eating to you… 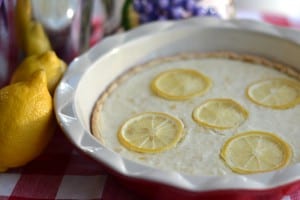