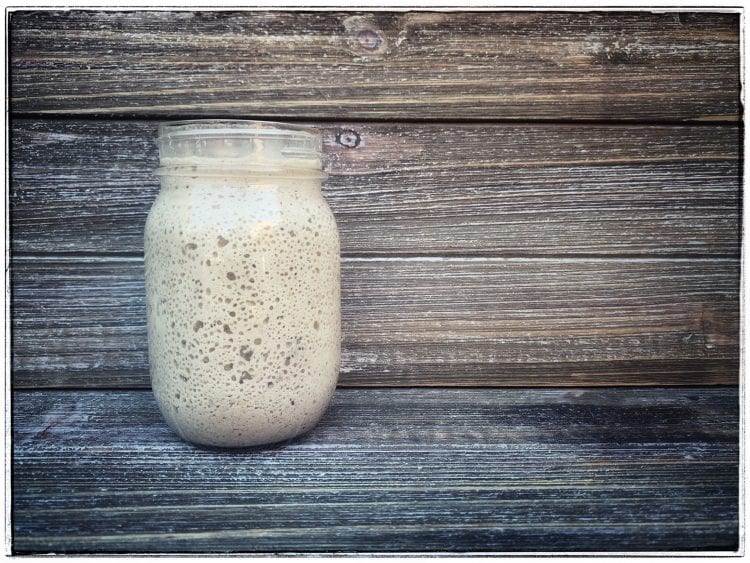 Good day, good reader! Are you healthy and well? I don’t know about you, but I’ve had enough of this COVID-19 pandemic already. Haven’t you? I miss Italy so much and I long to see the inside of an airplane and a hotel room once again. But alas, the gods are going to do what they’re going to do and I am just a mere mortal who must respect the COVID-19 virus, my health and well-being, as well as the health and well-being of those around me. So stay-at-home I stay. Aside from regular offerings of a non-human pharmakos on my domestic lararium, I am doing all that I can to stay fit, balanced, relaxed and reasonably productive during this incredibly strange time. I hope that you are being good to yourselves as well.

So, the last time I poked my head out of my fiendish lair of Roman food curiosities, every living human was producing homemade sourdough bread like they were the next bearded, tattooed, flour-dusted, post-punk, ‘artisanal’ baker on the avant-garde (or déjà-vu) bread scene… and the global grieving process was officially underway. You see, the sourdough bread baking phase of the COVID-19 pandemic’s early days was just the ‘denial’ stage for all of us; the first step of our collective grieving for the year 2020 and what it would become. For those who do not know the five stages of grief, they are:

In the ‘denial’ phase, we thought: “Hmm… this COVID thing is a tad worrisome and they’re making us all stay at home… but we’ll be fine… let’s plant a victory garden and bake a mountain of sourdough bread!” Then the ‘anger’ phase kicked in, after two months stuck at home, and some of us threw down our aprons and took to the streets, pointing fingers and burning masks. Then the ‘bargaining’ phase kicked in, which saw many of us turn to old-time religion, by making small sacrifices and offerings, in an attempt to bargain with the gods and change the trajectory that we are on. And then came ‘depression’. This is the phase that we are in now, and for some of us it just kind of moved in one day, like an unemployed cousin, as we began to consider that maybe we won’t be out of the COVID-19 woods at any point during the year 2020. One minute it’s May, and you’re happily baking bread, and then the next minute it’s September and you’re still in the same adult onesie that you were wearing in May and you can’t recall if ‘summer’ even happened this year… This, my friends, is depression and it can really ruin your lockdown. But let us not despair! Let’s get up, get out of that adult onesie, and open the curtains because I have a remedy for this temporary phase we are in! Times like these call for bold measures and REALLY STRANGE ancient Roman recipes to shake things up, and boy have I got a weird and wonderful offering for you today!

During challenging times like these, I like to turn to experimental food archaeology projects that are unusual, involved, and off the beaten track; you know, something weird and wonderful. Why go for the low hanging fruit when you can explore the less traveled roads of Graeco-Roman archaeological, literary, and pictorial sources related to food and create something really interesting… and this recipe most definitely falls under this umbrella. It’s not a recipe for bread, nay, it is a recipe for an ancient Roman sourdough bread starter made from something entirely unexpected… and it is a BEAST! But before we get to cooking it old school, a bit of history first:

Cereal grains have been a staple in the human diet for over 14,000 years and evidence of early cereal grass cultivation and domestication has been detected in the archaeological record as far back as 8,000 BC in the Levant, or what is now present-day Syria, Lebanon, Jordan, Israel, Palestine and Turkey. Farming and grain cultivation was one of the early hallmarks of the Neolithic Revolution which saw hunter-gatherer societies in the Levant begin to adopt sedentary (non-nomadic) lifestyles along with early farming and animal husbandry practices. It was during these early stages of the Neolithic Revolution that hybrid hunter/gatherer/sedentary farming societies learned to harvest and grind wild cereal grains such as einkorn, barley, rye, as well as legumes… and our taste for bread was born. Farmed in the Levant, einkorn was the first cereal grain to be domesticated; being a hulled grain, it would have been labour intensive and would have produced very filling porridges and unleavened flat-breads for these early populations. As domestication of cereal grains continued throughout history, preferred strains, such as free-threshing wheat, would be favoured and cultivated more frequently, eventually leading to the cereal grains that we bake bread with today.

The use of leavening agents in early bread-making was something that came along much further in the evolution of bread.  Along with early beer-making, the ancient Egyptians are often credited with being the first civilization to ferment dough and bake leavened loaves in clay ovens, as opposed to over fire-pits, in hearths, or with the use of hot ashes, stones, pot-sherds or tiles. This fermented dough, or leaven, would be the fundamental ingredient for making leavened breads for millenia to come and we have written records of its use in the Classical Mediterranean through Pliny the Elder’s ‘Historia Naturalis‘ (77 AD). In Book XVIII, Pliny makes reference to leaven used in bread baking in the passage below:

“Millet is more particularly employed for making leaven; and if kneaded with must, it will keep a whole year. The same is done, too, with the fine wheat-bran of the best quality; it is kneaded with white must three days old, and then dried in the sun, after which it is made into small cakes. When required for making bread, these cakes are first soaked in water, and then boiled with the finest spelt flour, after which the whole is mixed up with the meal; and it is generally thought that this is the best method of making bread. The Greeks have established a rule that for a modius of meal eight ounces of leaven is enough.“

But in the following passage, he speaks of two dietary ingredients that are often looked upon as lowly, both in the Roman world and in the modern era: barley and legumes. If you have a close look at what Pliny recorded next, you’ll see that he’s telling us something rather incredible:

“But when barley bread used to be made, the actual barley was leavened with flour of bitter vetch or chickling; the proper amount was two pounds of leaven to every two and a half pecks of barley….”

What the hecking heck? Did Pliny just say what I think he said? Did Romans make bread starter out of legumes? Out of Chickling Vetch? Wha?… What the… MY HEAD ASPLODE.

I know. It’s a great band name, isn’t it? “Chickling Vetch and the Angry Pistores! One night only… at the Colosseum!“… I digress. All jokes aside, let’s take a look at this little-known legume that Pliny speaks of.

Chickling Vetch (Lathyrus sativus L.) is a small, nobbly, white pea that is also known as grass pea, cicerchia, veccia, or chickling pea, and it belongs to the same species as bitter vetch. Thought to have originated in Turkey in the 8th millennium B.C., this drought-resistant legume was common in the Roman Mediterranean and was used mainly for animal fodder, according to Columella (De Re Rustica, II:19). In 1885, carbonised remains of chickling vetch peas were excavated from a domestic context at Herculaneum (The House of the Skeleton) alongside the remains of hazelnuts, figs, broad beans, walnuts, dates, lentils, and spelt grains. Perhaps, in urban settings, these peas were consumed regularly by both man and animal?

Pliny the Elder (Historia Naturalis, XXII:72) informs us that chickling vetch could cure anything from open sores to epilepsy. He also notes that the pea had a reputation for being hard on the bladder and kidneys. Pliny may have been warning of mild toxic effects attributed to the pea as he was well aware of the toxicity of bitter vetch and writes that ‘used as an aliment, this pulse is far from wholesome, being apt to produce vomiting, disorder the bowels, and stuff the head and stomach. It weakens the knees also; but the effects of it may be modified by keeping it in soak for several days, in which case it is remarkably beneficial for oxen and beasts of burden‘ (Historia Naturalis, XXII:73). Regardless of the effects, when processed correctly, the chickling pea provided Romans with a hearty legume that could feed the masses during times of drought and famine… and it made a damn good bread starter too! Chickling vetch is still consumed in parts of Italy today but it’s not as accessible or as popular as other common legume varieties are, such as chickpeas or lentils. So with that bit of history in our back pockets, let’s roll up our sleeves and make a legume starter!

Now if you really want a Roman baking challenge, go ahead and try to make barley bread as per Pliny’s leaven-to-barley ratio below. That’s 660 grams of leaven (starter) to 13 kilograms of unmilled barley. Hmm… I think Pliny may have been hitting the midnight mulsum when he did this calculation!

“But when barley bread used to be made, the actual barley was leavened with flour of bitter vetch or chickling; the proper amount was two pounds of leaven to every two and a half pecks of barley….”

Of course, you can use this starter to make leavened barley cakes, or you can use it to make sourdough bread along with depressed Don Draper and all the others who are still out there perfecting their tension pulls! The possibilities are endless and truly wonderful!

Lastly, as is the custom with all of my home-grown starters, I had to name this big boy and it didn’t take long before a name presented itself. Friends, Romans: I present to you: Marcus Attilius, gladiator. An unlikely hero and underdog,… fed with legumes and barley, just as all other gladiators were in ancient Rome. Attilius is truly a scene-stealer and a champion… and he inoculates a loaf of sourdough bread like a boss.

Most importantly, Marcus Atillius entertained and engaged me so much during the weeks that I began baking with him that before I knew it, I no longer had the COVID blues and I had moved closer to the ‘acceptance’ phase of my 2020 grieving process and I hadn’t even noticed! I mean, heck, with a sourdough starter like this blowing the lids off of jars and baking holey loaves like the one pictured below… I’ll be just fine here at home well into 2021! And you’ll be fine too. So get up and start soaking those peas! You’ve got a starter to make and bread to bake…

The science behind the starter! Learn more about legume flours during fermentation processes: https://www.ncbi.nlm.nih.gov/pmc/articles/PMC4618940/ Thank you to John Livesey and Dylan Thomas for sending this paper our way! 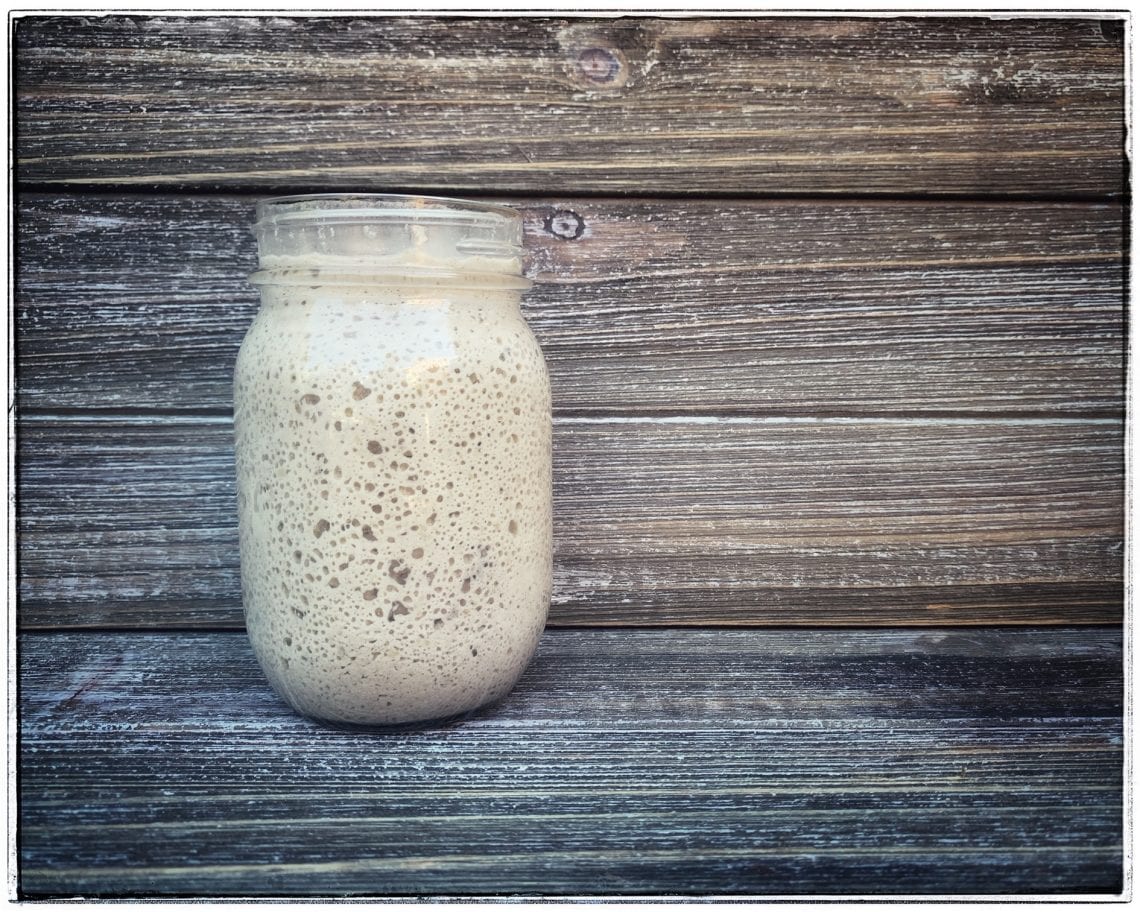