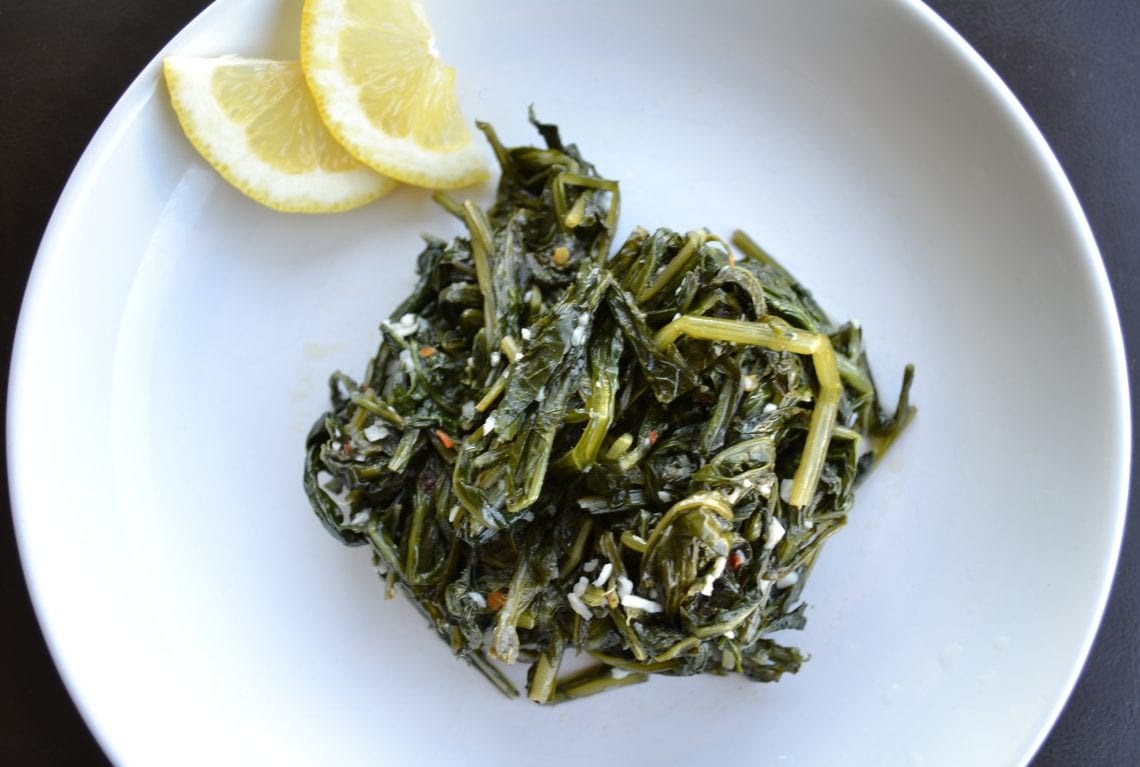 I had the pleasure of sampling cicoria (pronounced chi-ko-rea) for the first time when I was in Rome last summer.  At first sight on the table, to North Americans, cicoria would seem like swiss chard or spinach but it is far from it, I assure you!  It has a mild bitter flavour that is pleasant on the palette particularly when complemented with olive oil and garlic.

Common in Italian kitchens, cicoria is not a green that we cook with often in North America and when we do find it, it’s typically known as dandelion greens or chicory greens (not to be confused with endive).  A staple in Italian cooking, cicoria is an old-world mainstay in cucina povera, or poor man’s cooking.  La Cucina Povera is a very real example of how sourcing local food-stuffs was at one time a necessity, not just a food-trend or something our fore-mothers and fore-fathers did to lessen their carbon footprint.  Poor man’s cooking was the harsh reality for most of our grandparents during the depression and it’s important that we do not forget the contributions these simple foods made to modern cuisine; cicoria being one of them.

Historically, along with wheat, cicoria was one of the earliest foodstuffs to be mentioned in recorded literature and was referenced by writers such as Horace and Pliny the Elder.  Believed to have originated in ancient Egypt, the chicory root has also been used as a coffee substitute for centuries in some cultures.  Remember Grandma’s jar of Caf-Lib in the pantry that she used to use in lieu of coffee?  I do.  What do you think that was made out of?  You got it!  Chicory.

Now that you’ve read a bit of the background on cicoria, let’s try this simple and easy recipe.

Finding chicory or dandelion greens this side of the Atlantic may be tricky but if you’re going to find them, you’ll likely find them at your local farmer’s markets or organic food markets.  If you’d like to substitute something more accessible try curly endive or frisee.  Here’s what you’re going to need for this recipe:

To prepare the dish, boil the cicoria for 10 minutes; this will take a great deal of the natural bitterness out of the leaves and make the stalks much softer. Once the leaves have softened like spinach would on boiling, strain and leave it drain for a few minutes while you prepare the dressing.  In a pan combine the oil, minced garlic, salt and chili flakes and sautee on medium until the garlic begins to turn golden. Be careful not to over-sautee the garlic!  Drop the drained cicoria in the pan and toss it in the sauce gently on low for a few minutes.  Serve hot or cold as a side dish.

Buon Appetito!  Good eating to you…