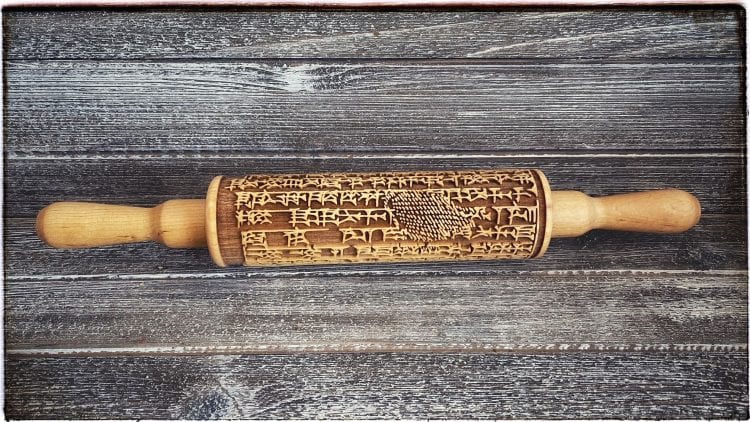 You wanted it so YOU GOT IT! Behold, ‘THE EPIC’ Cuneiform Rolling Pin: The Epic of Gilgamesh. Bring a bit of Babylonia to the holiday table this December and produce the world’s earliest known surviving work of literature on gingerbread! Translation included…

Click here to buy an EPIC cuneiform Gilgamesh pin in the Tavola Shop.

It’s Christmas in Mesopotamia! So let’s bake like a Babylonian and make the internet’s most popular Christmas biscuit with this archaeologically-derived cuneiform gingerbread rolling pin exclusively available through Tavola Mediterranea. THE EPIC is a cuneiform rolling pin that is ‘edible archaeology’ at its finest, giving bakers, archaeologists, and linguists alike, the opportunity to consume archaeology and ancient writing systems in a way they never have before! Why simply study it when you can eat it too? With THE EPIC, not only do you get to read a passage from one of the greatest stories ever told, as it was written in text dated to 1,800 BC, but you can wash it down with a cup of tea once you’re finished!

There are two EPIC varieties to choose from!

The pin-faces of THE EPIC cuneiform rolling pins feature passages from Column 1 and Column 5 from the Epic of Gilgamesh — a Mesopotamian epic poem which is the earliest known surviving work of literature. The image/text is derived from The Yale Tablet of The Epic of Gilgamesh, pictured below, which was sectioned into columns and lines during translation by Morris Jastrow Jr., University of Pennsylvania, and Albert T. Clay, Ph.D, Yale University, in the 1920s.

The Epic of Gilgamesh passages featured on each pin have been translated by Morris Jastrow Jr., University of Pennsylvania, and Albert T. Clay, Ph.D, Yale University, in the 1920s. A translation sheet for each rolling pin will be included inside the box with each pin so you can read it to friends, partners, neighbours, or the cat, before you start rolling out the most literarily and archaeologically rich Christmas biscuits you’ve ever made.

This cuneiform rolling pin measures 20 cm in length and is designed for making a large gingerbread tablet. It creates an embossed impression of the symbols, rather than an impressed one (we’re working on that)… but you’ll still be the coolest baker in the bunch so no worries! Each rolling pin comes with a complimentary gingerbread recipe card that is derived from the original internet-breaking Cuneiform Gingerbread Tablet recipe that was published on Tavola Mediterranea in 2017. It will be mailed separately, though, as it does not fit in the box!

This rolling pin creates a cuneiform script relief and will roll the impression on to the gingerbread dough beautifully, without sticking or pulling the dough up, if you work with the dough chilled and dust a bit of flour on the pin or dough surface prior to rolling. Don’t forget to use the Tavola gingerbread recipe and baking instructions for this pin as the dough is firm and will hold the impressions beautifully during baking.

Head on over to the TAVOLA SHOP to buy your EPIC cuneiform rolling pin today. Instructions for use and tips for nice, clean impressions are also available on the TAVOLA SHOP page. These will sell-out fast! Pre-orders are available if current stock sells out and you will be notified by email when your pin has shipped. C’mon, Enkidu, it’ll be totally epic!

Merry Christmas and Happy Holidays everyone!

Peace on Earth… and pass the cuneiform gingerbread!