When I think of potatoes I think of comfort food: warm, soft heaps of boiled and buttered mash meant to stick to the ribs and keep us warm through the winter.  The potato has long been looked at as a dull but comforting side-dish with little flavour that is best dressed with multiple toppings or whipped with salt and butter.  Historically, however, this tuber has a colourful past. The potato dates as far back as 500 BC to Peru and Chile where the Incas grew and cultivated them in the Andes Mountains.  Brought back to Spain on the ships following the Spanish conquest of the Inca Empire, the potato made its European debut in the mid 1500s.  English explorers then introduced it into English, Scottish and Irish environs where local cultivation eventually led to it becoming a staple crop. In fact, it was Sir Walter Raleigh who first brought the potato to Ireland and planted them at his estate in Youghal, near Cork.  Unfortunately those who consumed the plant ate the poisonous leaves, not the tuber itself, causing illness and the plant to become banned for a spell on the island.

The rest of Europe would wait until the late 1700s before the potato gained prominence there but not before it was shunned for many years as a food for the poor and feared for its poisonous properties.  And in perhaps its darkest hour, an airborne fungus called phytophthora infestans was brought back on the ships from North America infecting potato plants and eventually caused the Irish Potato Famine. In the mid 1840s, the blight caused potato crops in Ireland to become diseased and subsequently left a nation dependent on the crop to starve.  As a result, approximately one million people died and another one million left the country causing the greatest diaspora in Irish history and reducing the population at the time by approximately 25 percent.

With this recipe we’ll be making a potato side dish that is best known in Greek and Italian cuisine. The best aspect of this recipe is that you’re not going to boil the potato to mush and flavour it with butter. We’re going to dress these potatoes up a bit and let them shine. The recipe is very simple to make and the addition of lemon as a flavouring makes the humble potato so much more exciting!

There really isn’t much fuss required for this recipe. Preheat your oven to 400F/200C/Gas Mark 6. While the oven is heating prepare the potatoes.

Quarter the potatos and place them into a large mixing bowl. In a separate bowl combine the olive oil, lemon juice, salt and pepper. Pour the marinade on the sliced potatoes and give them a good turn or toss to distribute the marinade evenly. Line the potatoes up on a long rectangular baking sheet and roast for 1 hour or until tender and crisp. Sprinkle with diced parsley and serve!

Please feel free to post comments or suggestions about this recipe below. 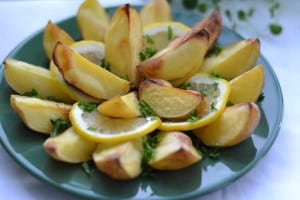