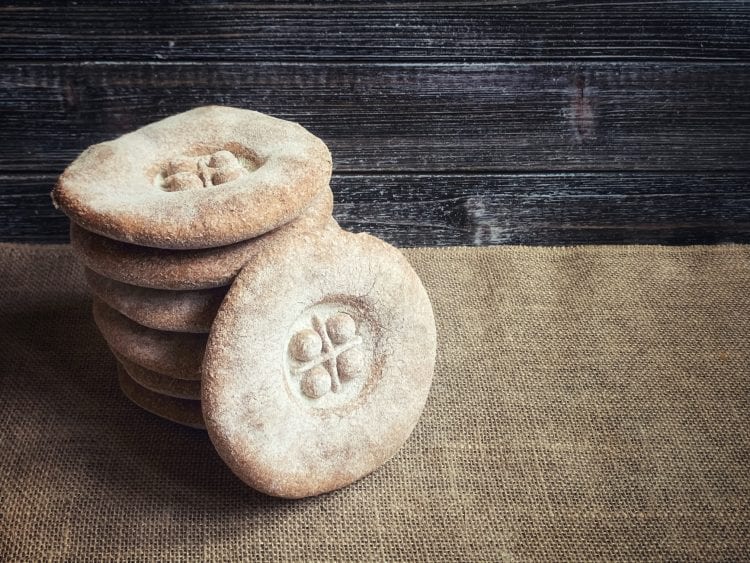 To understand what we’re about to do, we need to go back to The Breakfast Club, the quintessential John Hughes 80s high school coming-of-age drama with the greatest soundtrack of all time. Remember it? Good. Now, think back to the female characters in the movie. Who comes to mind first? Molly Ringwald, right? Ringwald played Claire, the rich, well-dressed, popular girl with a thing for sushi and bad-boy head-bangers. And then there’s Allison, played by Ally Sheedy, the ‘ugly duckling’ who exists quietly in Claire’s shadow for the first half of the film, scowling and making dandruff art. By the end of the movie, though, Allison comes out of her shell and the ‘ugly duckling’ becomes a beauty in her own right. And that’s what we’re dealing with in this post, on a blog that is often focussed on Roman bread and the panis quadratus, in particular. Let’s look at it this way: if Claire is the panis quadratus then today we are going to turn our attention to the Allison of the Roman bread world, the ‘Herculaneum Bath Bread’: a loaf of bread that has lived in the shadows of the panis quadratus since it was first excavated in 1874. And boy is it a beauty.

The loaf of bread that we are coaxing out of the shadows today is a small, circular, single-serving loaf of bread that was excavated from the second story of the Herculanean bath complex, Le Terme Suburbane, in 1874. Bread… in a bath complex?! I know… how odd, right? But we’ll get to that later. Let’s look at some of the features of this loaf that make it so unusual!

This Herculaneum Bath Bread is the only one of its kind found in the Pompeian region that was preserved following the eruption of Mount Vesuvius in 79 AD. While researchers and archaeologists had 80+ panis quadratus loaves to study over the last 158 years, there was only one of these personal-sized loaves and it has survived intact since 1874. I have seen it, handled it, and photographed it myself… but I haven’t asked for permission to publish the photographs of this loaf (yet) so I have published the image above that was already published by the Soprintendenza, years ago. You’re going to hear more about this little guy in my writing, but for now let’s take a quick glance at the loaf.

The loaf itself is a small, unleavened flatbread that could feed one person. The most intriguing aspect of this loaf is the fact that it bears a stamp in the centre of its upper surface with a very specific symbol on it. This is something that I discuss in great detail in my lectures and workshops: the symbologies of Roman breads. Because Roman bread is never just a loaf of bread, is it? Those clever Romans always had to give bread ‘broader meaning’, dual purposes, and adorn them with impressions and symbols to confound future archaeologists like yours truly! The symbol on this loaf is no exception… but it’s not the first time this symbol has been observed in the archaeology of the Italian peninsula.

Guglielmino (2008) records a series of ritual finds from a sanctuary site in Roca, Italy, which is an archaeological site located on the Adriatic coast of Apulia in Southern Italy. Guglielmino argues that some of the finds at this site demonstrate a trade and cultural relationship with Minoan Crete during the 2nd millenium BC. The ceramic ritual bread offering ‘vase’ below is one of the items that was excavated from the site of Roca. Guglielmino notes that the bread vases and their symbols were not historically reflected at all in the local Roca ritual symbologies and were clearly inspired by, or imported from, sources that were Minoan, Mycenaean or Cypriot. Guglielmino also notes that this symbol has been observed in other ritual contexts in the eastern Mediterranean, in relation to sun worship.

But the wonders don’t stop there, folks! One of the other topics I discuss in my lectures and workshops is continuity in Italian bread-making… because you won’t see anything else like it, the world over. In some regions of Italy, bread forms and symbologies have not disappeared or evolved; in some areas they have remained unchanged for millenia. Taralli/Tarallini are a perfect example of this dynamic: they have been made the same way for thousands of years. And in the case of the Herculaneum Bath Bread, and the symbol stamped into it, we may be observing continuity in action between Minoan ritual symbologies and later Roman commercial bread stamping practices in the Bay of Naples in 79 AD. And if we want to take it back full circle, to a ritual context once again, all we have to do is look forward, a few hundred years, at early Christian representations of the 4-wedged panis quadratus after it was adapted, and adopted, into the early Christian church as the Holy Eucharist. Now THAT’S continuity… and it’s also just the tip of the iceberg. Who knew that this small, overlooked, unleavened flatbread would turn out to be this intriguing and this beautiful? Ugly duckling no more!… Allison takes the spotlight and wins the jock! …No one puts baby in the corner! (Sorry… wrong 80s movie…).

So with that brief bit of history and context tucked firmly into our togas, let’s get the donkey strapped to the mill and make some Herculaneum Bath Bread! Here’s what you’re going to need:

I have to say that, due to the fact that these loaves are unleavened, I did not have high hopes for the final product being remotely palatable or texturally pleasant — and boy was I wrong. On their own, the loaves were crunchy on the exterior and soft on the inside. Fully baked at 30 minutes, chewy crust, pleasant crumb, and not as heavy as I expected them to be. My choice to add salt, which may not have been an additive used in the original Herculanean recipe for these loaves, made it a perfect flavour combination. So simple yet so satisfying.

I then decided to whip up a quick pisam/fabam stew, a basic bean stew, to see what the bread was like when used in combination with a basic bean stew, as it may have been in a taberna setting. This is when it all made sense. When these loaves are consumed in tandem with a nicely dressed fabam dish, it takes the term ‘comfort food’ to a whole new level. All I wanted to do was cram myself in to a corner-table of a cramped, bustling taberna over a dish of hot bean stew and put back two or three of these adorable loaves! But would I eat them at the bath?… why did archaeologists find this loaf of a bread on the second floor of a bath? Let’s talk about this for a minute…

While it wasn’t unheard of for snacks to be had while visiting the baths, they’re not commonly regarded as food and beverage spaces. We know that commercial bakeries made bread for sale to the public and these breads were also sold in the local macella and on the streets by bread-hawkers or placentarii. A busy Pompeian or Herculanean could easily buy a small loaf or a portion of bread while passing through town, rushing between one place to the next. I am reminded of the infamous fresco of a salesman selling bread from a market stall that was a part of a collection of incredible ‘daily life’ frescoes that adorned the walls of the House of Julia Felix. The frescoes within the House of Julia Felix depicted images of daily life in a market setting, merchants, customers, haggling and viewing the various items for sale. In the fresco of the bread-stall, we see artistic representations of panis quadratus loaves stacked high on the market stall shelves. Some of the loaves are dark brown and some of the loaves are a light, golden yellow, which may suggest that both panis cibarius or secundarius — breads made with unrefined whole wheat — and panis siligeneus — luxury breads made of refined white flour — were being sold from the stall depicted in the fresco. In addition to this observation is a basket behind the stall counter, which suggests it’s not for public access, that may have been for street-hawkers to carry bread in. Upon closer examination, we can see that the breads inside this basket are small, circular, and dark in colour. Perhaps this basket is carrying the type of loaf that was excavated in 1874 from the second story of the Terme Suburbane on Via Marina in Herculaneum? On the top right of the stall shelf is another small, circular loaf, which is lighter in colour. Perhaps this is the same type of loaf made with thrice-bolted flour, giving it a lighter tone? We’ll never know for sure, but the resemblance is intriguing.

From the bread stall fresco alone, one could conjecture that the small loaf we are focussed on in this post was perhaps bought at a market stall, or from a bread hawker in the street, and was then tucked away for safe keeping with the buyer’s clothing, as he made a quick pit-stop to the public baths before heading home for the evening. Unaware of the fact that his afternoon was going to take a bit of a nasty turn, his plans to enjoy the small loaf following his bath would be violently interrupted by the eruption of Mount Vesuvius. The eruption engulfed the town of Herculaneum and this man’s loaf of ‘bath bread’ was never consumed. Rather, it was left behind for archaeologists to study and recreate 2,000 years later instead. So, I think we owe our bather a debt of gratitude don’t you? Gratias tibi ago, amice; panis bonus est! And thank you to you, young coquus, for reading along as always.

Join in the discussion on our Facebook page or leave a comment about this recipe below on this page. If you’d like to chat in person with me or about any of the other recipes, you can join me at one of the The Old-School Kitchen live events taking place at a museum or venue near you. More information about this year’s events can now be found on the Events Calendar page. 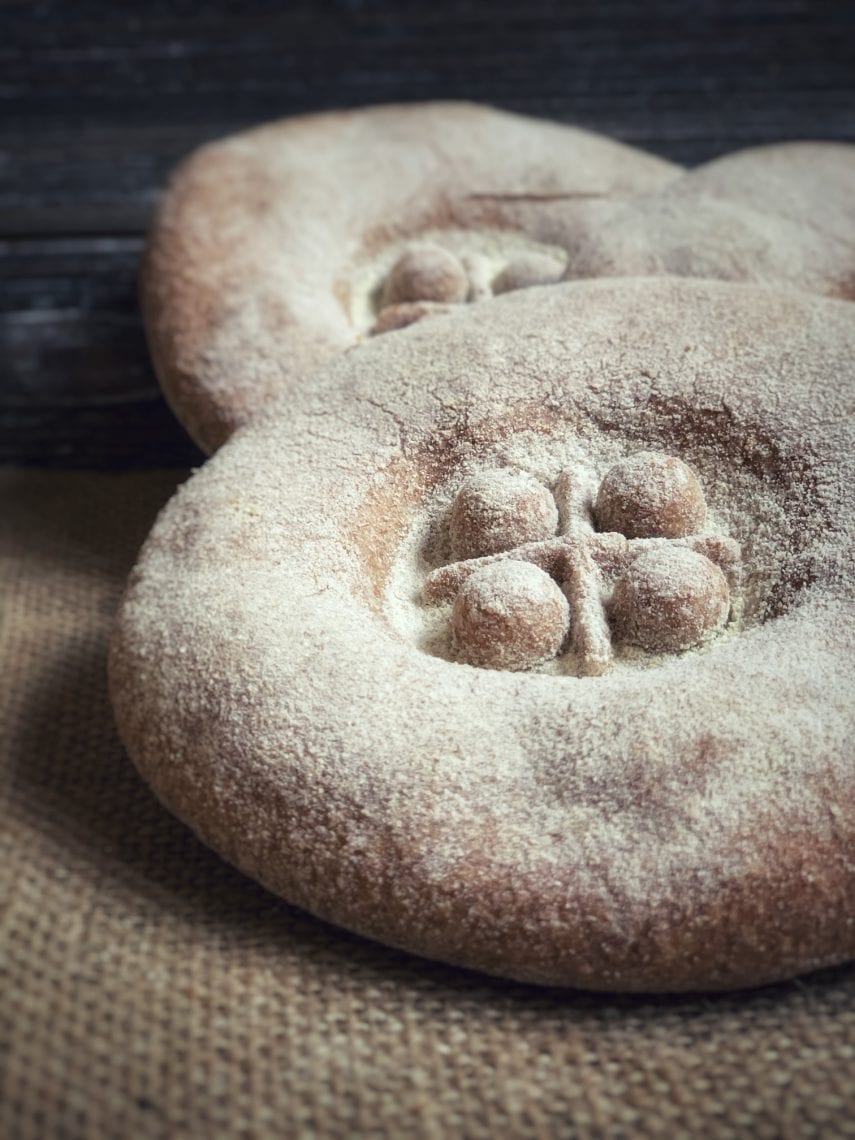 One comment on “Baking with the Romans: Herculaneum Bath Bread”