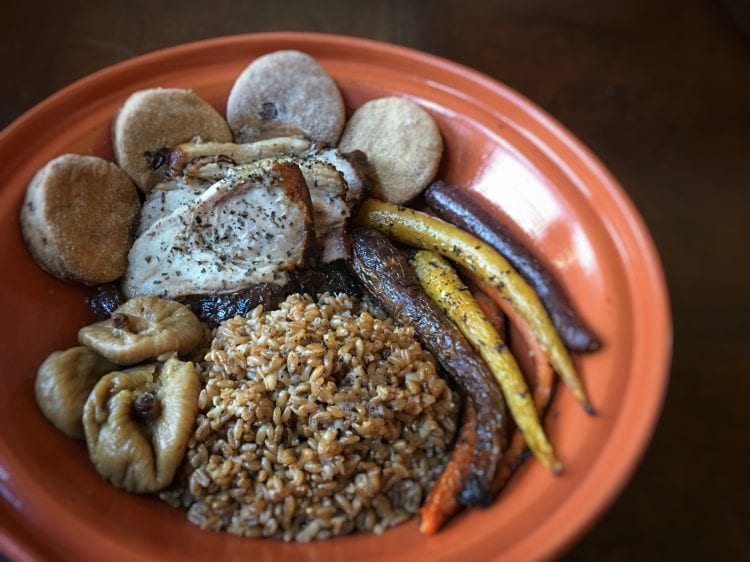 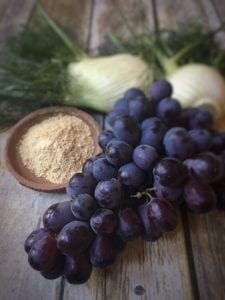 Good day, coqui! It’s getting a bit chilly on the old latifundium, isn’t it? Not such a bad thing, really. It simply means that it’s time to start cooking some hot, carbohydrate-rich meals that stick to the ribs… ancient Roman-style! Up here in the northern hemisphere the days are growing cooler, nighttime is arriving earlier, and people are starting to naturally shift into the ‘home cocooning mode’ that tends to start as autumn sets in. During this ‘cocooning’ phase is when many people return to their kitchens again and cook more frequently than they did during the hot, bright summer days that keep us outside longer. Breads are baked, crock pots are bubbling, soups are simmering, and nightly meals start to take on a hearty and filling quality leading up to annual family and community gatherings such as Thanksgiving, Winter Solstice, Christmas, Hanukkah, Kwanzaa, Ramadan, and Diwali, for example. I feel that it is only fitting, then, that we prepare our bellies and waistlines for the months to come by testing out some hearty and filling ancient recipes, nay? So in preparation for the season of feasts, I am calling on our old friend, Apicius, once again to present another beautiful recipe for Roman comfort food: Passum-Braised Pork Shoulder. What’s exciting about this post is that it also features the recently posted recipe for Grape Must Cakes. This is a perfect opportunity to highlight how well these delightful sweet and savoury biscuits complement a meal of meat and vegetables. This recipe also demonstrates how familiar Roman cooks and gourmands were with pairing meat with fruit and fruit products, such as defrutum or passum. The Romans didn’t just grow grapes and consume them off the vine, they made them into multiple products from raisins dried in the sun to wine made from pressing grapes in large rotary presses made of volcanic stone. But before we press on (no pun intended…) let’s take a closer look at the technology used to process grapes in the Roman world.

If there’s one thing that we’ve learned about Romans in the kitchen thus far, it’s that they do not waste food; they use and consume everything that is edible from offal and stale bread to wheat bran and fish guts. If food could be made from it, the Romans would find a way. Another thing we know about the Romans is that they liked their wine. They were skilled winemakers and even had a use for the grape pulp and skins, known as grape must in the historical written record, so as to not waste this by-product of the wine-making process. One of the uses of grape must in the Roman kitchen was in the preparation of a grape must reduction, known as defrutum, which was used in the preservation of fruit and wine but was also used as a sauce and colourant for various meat dishes.

To begin the wine-making process, Roman vintners used a two-part grape-crushing system involving treading and pressing. Grapes were trampled in vats at a tocularium. Must (the juice, skins and pulp) from the trampling was then transferred into dolia, high-volume ceramic storage vessels, to begin fermenting. Often, however, wine-makers would process the must a second time by running it through a press. Pressing the must ensured that the must was pulverized and exposed enough prior to the fermentation process. What’s interesting about the pressing process is that it was an arduous, long and drawn-out process that often went late into the night and the wee hours of the morning. It makes me wonder if milling grain in the bakeries was just as long a process! The above press was excavated at Villa Regina in Boscoreale (Italy) along with carbonized remnants of olives, raisins and other archaeobotanical evidence of food processing and oil and wine-making. According to Thurmond (2006), some of these grape/olive presses were often located in rooms that were flanked by cubicula, or small sleeping chambers, that the pressmen would nap in between pressings. After the pressing, the must was then strained of impurities or seeds and placed into pitch-lined dolia, skins and all, and left to ferment until yeast bloomed and alcohol was eventually produced. A note on pitch: It was common for transport amphorae and dolia in the Classical Mediterranean to be lined with pitch made of pine resin. This was a liner that was applied to the porous inner surface of a ceramic vessel that prevented contamination of the liquid inside of the vessel and also allowed for the vessel to be used multiple times over. Wine was commonly stored in pitch-lined vats whereas garum and olive oil were not. These products, when trapped in the porous lining of a ceramic vessel, rendered the vessel single-use only due to the possibility of contamination or rancidity. Another interesting remnant of pine resin pitch use and Classical-era wine-making is the Greek wine known as “Retsina”. It is a ‘resinated’ wine that is believed to be a continuation of the Classical Mediterranean wine-making tradition. The flavour of pine resin in Roman wine must have been quite pronounced and savoured by the Roman palate but it also would have eventually dwindled away as amphorae and dolia were surpassed by wooden liquid storage vessels in the Late Roman period. Pitch was no longer required with wooden vessels.

So with this brief introduction to Roman grape processing and wine-making, why don’t we roll up our toga-sleeves and scoop some grape must out of the dolium. We’ve got some cooking to do! Here’s what we’re going to need:

If you plan on making the Grape Must Cakes to accompany this recipe, please follow those recipe directions here and start that recipe first before you prepare the pork shoulder.

Apicius tells us how to prepare Passum Braised Pork Shoulder as follows:

Book VII, 10, Musteis Petasonem: “A fresh ham is cooked with 2 pounds of barley and 25 figs. When done skin, glaze the surface with a fire shovel full of glowing coals, spread honey over it, or, what’s better: put it in the oven covered with honey. When it has a nice color, put in a sauce pan raisin wine, pepper, a bunch of rue and pure wine to taste. When this sauce is done, pour half of it over the ham and in the other half soak specially made ginger bread.* The remnant of the sauce after most of it is thoroughly soaked into the bread, add to the ham.“

*A certain biscuit or cake made of must, spices and pepper, perhaps baked on laurel leaves. Mustaceus was a kind of cake, the flour of which had been kneaded with must, cheese, anise, etc., the cake was baked upon laurel leaves.

Here is how I prepared this Apician dish. Note that I have added barley and carrots to the dish to broaden it a bit:

1. In a large pot of water, submerge the pork shoulder, barley and figs and bring it to a boil. Simmer all 3 ingredients on medium/low until the barley is tender and chewy but not too soft. Approximately 30 minutes.

2. While the pork and barley are simmering, prepare a roasting pan. Cover the bottom of the roasting pan with 10 to 12 large carrots. Set aside.

4. Prepare the passum. If you can obtain a bottle of Vin Santo, use this, if not you can make a faux passum basting sauce by making a raisin and wine reduction. If you have Vin Santo, take a cup of it and reduce it to half by boiling it. If you are not using Vin Santo, make the faux passum “raisin wine” like so: Combine 1 cup of red wine and 1/2 cup of raisins, and some diced cicoria or a few pinches of edible rue in a sauce pan and heat the liquid until boiling. Simmer until there is approximately 1/2 cup of reduced raisin-infused wine left. Some wine will evaporate, some will absorb into the raisins. Strain out the raisins and reserve 1/2 cup of the ‘raisin wine’ passum for the basting sauce.

5. Once the barley is tender in the pot of boiling water, gently remove the pork shoulder from the water and place it in a frying pan with a splash of oil. Heat the pan and baste the shoulder with honey using a brush or the backside of a spoon. Sear the shoulder on all sides until browned and then place the shoulder into the roasting pan on top of the carrots.

7. While the shoulder and carrots are roasting, strain the barley and figs from the pot of hot water. Separate the figs and place the barley into a large mixing bowl. Add some salt and pepper to taste, a splash of olive oil and toss the barley gently to dress it thoroughly.

The final result for this braised pork recipe is a beautifully balanced, sweet and tangy pork dish that is filling, comforting and complemented well with the barley and grape must cakes. The honey and passum dress the pork and carrots perfectly. The barley is warm and comforting and the texture is pleasant, wholesome and simple. The grape must cakes take the prize in this recipe as a wonderful dumpling or biscuit substitute that sops up the passum reduction and juice from the pork beautifully. The flavours of anise, cumin and grapes in the must cakes go perfectly with the sweetness of the passum- and honey-braised pork. Don’t skip the additional recipe for grape must cakes; it rounds the meal off perfectly. Plus they’re so wonderfully filling that you’ll have everyone fed, dozing off and into the sack just in time for you to hit the midnight mulsum and catch a few reruns of HBO Rome! Oh Titus Pullo…. how we have missed you! 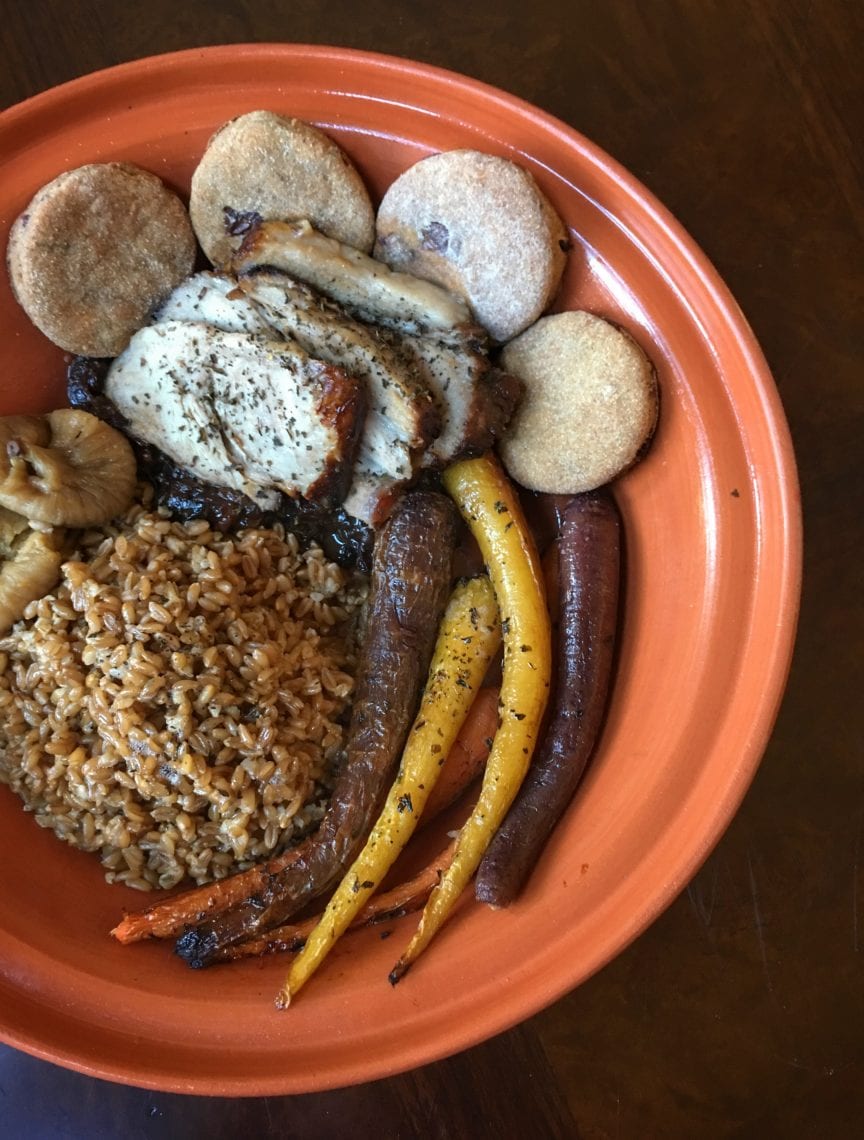