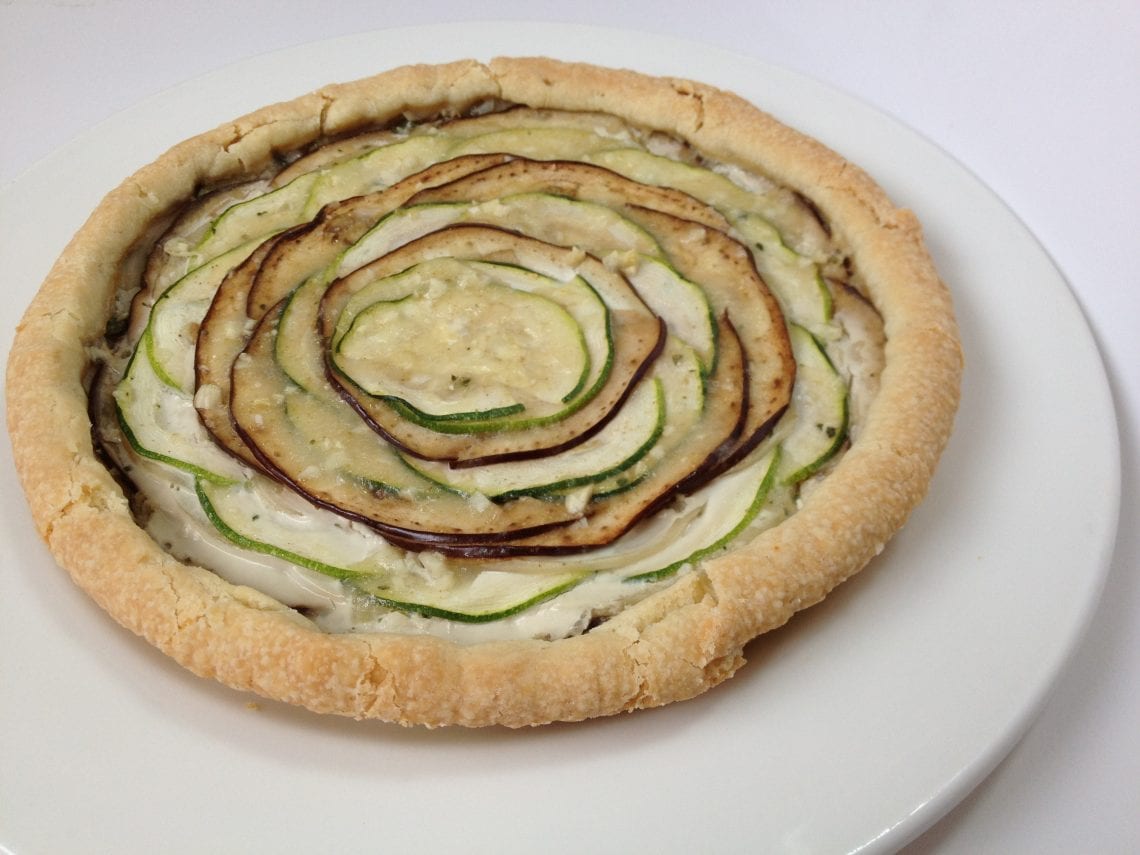 The galette is an open-faced, uncovered pastry (or pie) that is a tradition of Brittany, an area in northern France with Celtic origins.  Historically, the galette was made popular as a type of cake (Galette Des Rois) associated with the Epiphany, celebrated on January 6th, in Catholic liturgical tradition with the cake symbolizing the visit of the Magi to the Christ Child.  Versions of the Gallete Des Rois can be found outside of France as well during celebrations of the Epiphany.

More commonly, and in the  modern day, a galette is a large pastry that can contain anything from fruit and berries to meats, cheeses and vegetables. Galettes can be prepared as a sweet or savoury pastry making it a very versatile option for both lunch and dinner, as well as an appetizer or dessert course.  Perhaps the most unique and charming aspect of the galette is that the edges of the crust are usually folded in,  or a series of overlapping pleats are created on the crust edge, to form a lip that overhangs the basin.  Aesthetically this is something that I find to be very pleasing and unique.

I recently purchased my very first mandolin in the Bowery in New York City last month.  Now I’m sure you’re thinking “What does a mandolin have to do with making a galette?”  Well, this is not the kind of mandolin you’re thinking of and I certainly won’t be singing songs, strumming away on it in the kitchen unless I want to see my fingers removed knuckle by knuckle.  This type of mandolin is an incredibly sharp and very efficient kitchen tool that allows you to finely slice and julienne vegetables and fruit.  Leave your Henckel out of this because the precision and consistency a mandolin gives you when you want to slice finely and evenly is a joy to behold. I decided to break in my new mandolin by making the galette recipe below.  *Important*  If you too are going to use a mandolin, remember to read the instructions or watch a YouTube video first (as I did) and learn how to use the finger guard!  And if you’re drinking wine and cooking at the same time, be sure to pay extra attention while you’re slicing.

Prepare the pastry dough by cutting the butter and milk into the dry ingredients in a large mixing bowl or in a food processor.  Do not heat or warm the butter, cut it into the flour mixture and let it blend and warm as you go.  Once the dough is formed, cut it in half and wrap each piece in plastic wrap or place into a ziplock bag.  Set aside in the fridge for 30 minutes and begin preparation of filling and sauce.

To prepare the filling use a mandolin (or a cutting tool of your choice) to slice the aubergine, zucchini and onions into fine circular slices.  Then stack and slice the aubergine, zucchini and onion into halves so you have two stacks of half-moon shaped slices for each ingredient.  Fast-fry the onions in oil for about one minute until they’re translucent and then set aside.

Return now to your pastry dough by rolling each half out as circular as possible and placing them each into pie-plates.  Create a lip around the upper edge by either rolling the edge in and pinching it as you go.  You want to create a small shelf or an overhang that will curl over the filling once it goes in.  Once this has been done place the empty shells in the oven for 5 to 7 minutes until the bottom of the shell is lightly baked. *Important*  If you do not prebake the shell for a few minutes before adding the filling you could end up losing the filling through the bottom when preparing to serve it.  While the shells are being prebaked, prepare your sauce.

Prepare the sauce by combining all sauce ingredients in a food-processor and blending on medium for one minute until the garlic is minced and the mixture is smooth and creamy.  Set aside.

Prepare the filling working from the outside in and layering an overlapping row of zucchini first.  Then layer a row of aubergine, then onion, and so on.  Repeat layering until you’ve reached the centre. Fill the centre in with some of the smaller pieces of zucchini. Do the same with the second crust. Once each pie has been layered with the filling add half of the sauce mixture to each shell pouring evenly and generously over the filling.

Bake the filled shells for an additional 15 minutes or until crusts are golden brown and the sauce is baked into the filling.  Serve with leafy greens.

Bon appetit! Good eating to you… 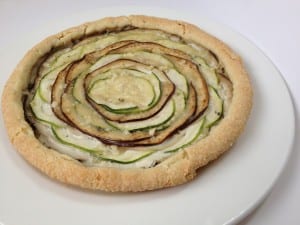